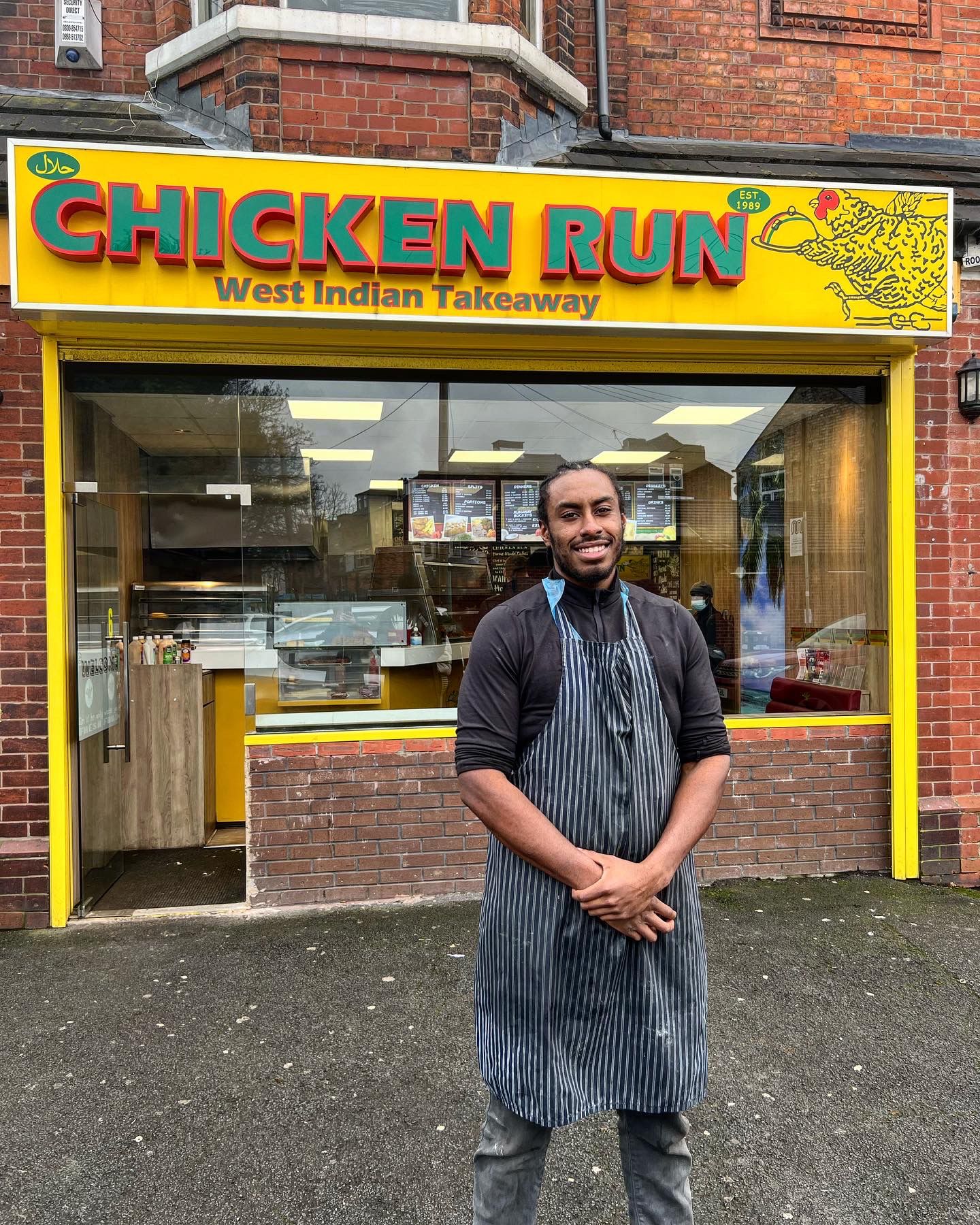 “Where I’m from, it’s all rain and music – but I’d go to this chicken shop after school and get a chicken split”

This was a very real conversation I’d had with a friend at uni halls in 2009 (shut up) about what’s so great about where we came from. I’d heard about the long-standing institution that is Chicken Run even before my first trip to Manchester, so pretty fair to say this feature has been a loooong time coming. Kwame, who now runs the family gaff with his brother Leon, took a hot 5 to step out from the mad crowd of regulars and (believe me when I say-) KEEN new diners, and give us the Chicken Run story, of which he is a main cast member.

“Funnily enough, no one actually realises this but you know the actual movie Chicken Run? The guys that made it lived around the corner, so we were there before that was even around…

Theres a lot to it. I wasn’t born when it first started, but for the most part my mum and dad started it just as a way to support their children. My dad has 13 kids, he’s always been cooking.”

Kwame’s father retired after running it for 31 years, to fulfil a lifelong dream. “My whole life he’s been setting up to go to Africa. Since the beginning, he’s been trying to build a house there and sort stuff out to live there and now finally he’s been able to. So he’s left it to me and my brother.”

With such a cult following, it’s a lotttt of pressure. But if anyone knows how to carry on this legacy, it’s Kwame and Leon, who spent most of their childhoods in and around the joint:

“In Primary, after school, we’d all be sat upstairs most of the evening til 9pm”.

So it’s widely known that you go to Chicken Run for one main thing, their holy grail: The Chicken Split. While I wait for the interview, it’s all anyone in the packed place orders, so it’s important to relay to you just how deserved the hype is.

Tasting notes: A long dumpling, pillowy on the inside and with that sweet, sweet crust on the outside – sliced through and stuffed to within an inch of its poor delicious life with CR’s signature fried chicken and tart salad cream. It’s messy, it’s glorious, and it’s a joy to eat. It was a good part-way through our chat that one of Kwame’s well-meaning friends stopped to tell me I had salad cream on my nose, which should give you an idea as to how this behemoth of beauty is to be eaten. No regrets tho huns, you’ve got to lean into this party in your hands and not GAF. It’s the only way.

They also serve home-made cakes (Kwame’s favourite is the marble, but I think my heart belongs to the pineapple, with hot custard. Oh god.) Wash all the goodness down with some homemade juice – go for the sorrel, you won’t regret it.

Standing proudly in Moss Side since 1989, the place has seen a lot of changes over the years, and the whiff of gentrification is permeating the area. The shop used to have a bullet hole in the wall, for those who remember, and Kwame reflects on how different things are:

“Its way calmer than it was then, even in terms of things you’d see outside. The odd shooting here and there, you don’t really get anything like that anymore.”

Manchester is rapidly becoming one of the fastest-growing cities in the UK, with the property market a bloodbath. Make no mistake though, Chicken Run’s going nowhere.

“We’ve been here long enough so not much is gonna affect us, but you can see it more when you go up princess road. Like, they’re building slowly away from town all the way down. It’s mad.”

On his way back into the shop, which is now heaving, Kwame calls over his shoulder and asks if there were any requests. ‘How do you want it?’ My indecisiveness due to ordering-regret and thoughts of Tu Pac serve me well, as

I’m presented with a Kwame Special. And oh sweet baby J, this thing is weighty. Unwrap the paper and behold: a chicken split BUTONLYWITHMACANDBLADDYCHEESE. These things are filling as fuck as it is, but why not treat yourself? You’ll be full for a week.

Ending on the Chicken Run ethos, Kwame shows that he’s staying true to his parents’ vision and nothing will shake this institution.

“Feeding the community, that’s what it’s always been about. There’s a lot of people that rely on us”

Now, more than ever, this resonates. Do yourself a favour and get to Chicken Run, where you’ll be eating history, community and soul.