Local produce is a way of life in the kitchen of Manchester's newest and most heavily instagrammed hotel... 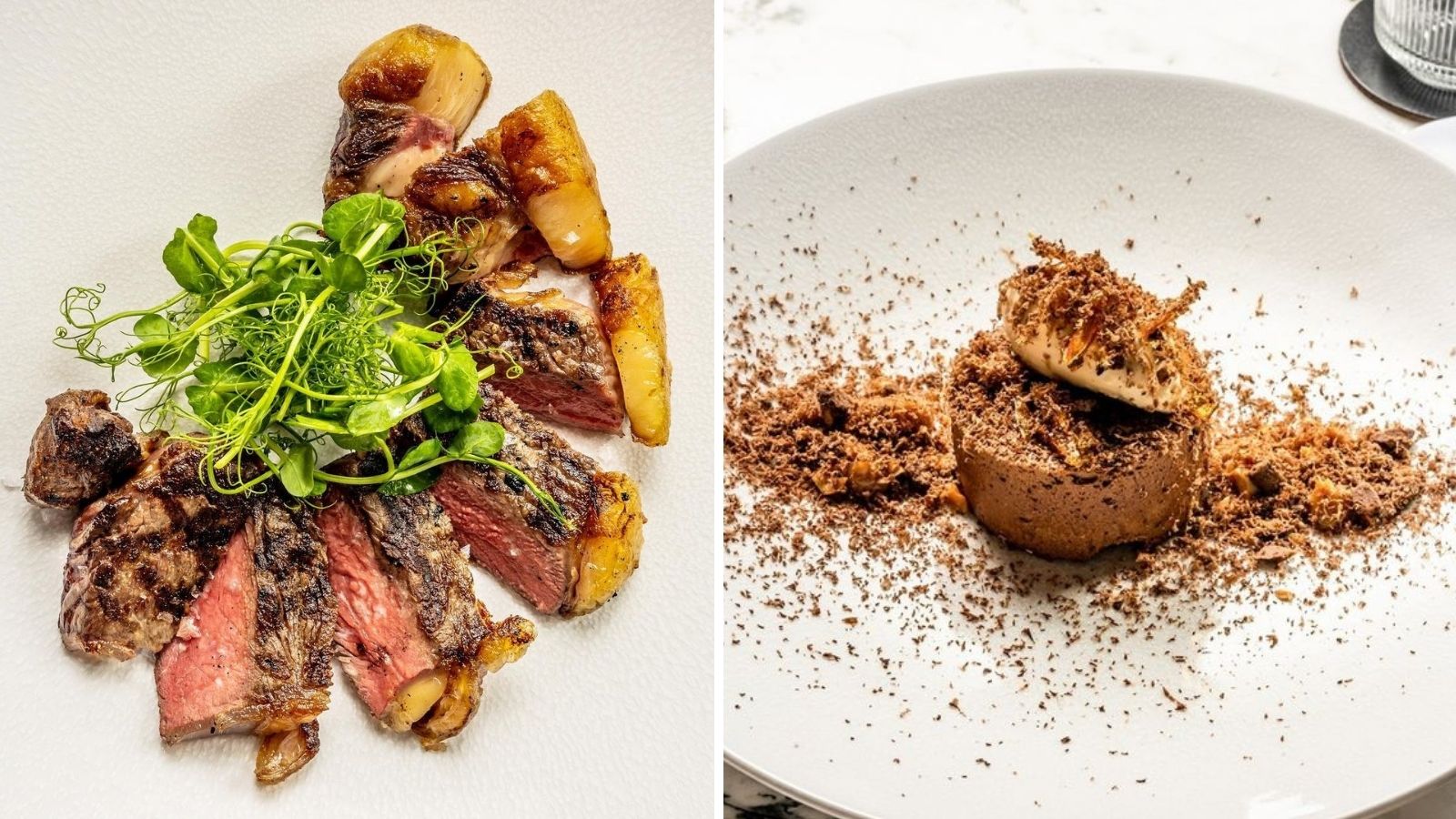 Through no fault of their own, the terms ‘sustainable’ and ‘locally sourced’ are en route to becoming buzz words, aimed at enticing diners towards restaurants who slap them across their menus as a box ticking exercise rather than a credible desire to promote regional independents and a healthier environment. At The Alan, Manchester’s newest and most heavily instagrammed hotel, however, these words are not mere opportunistic phrases, but an absolute way of life in their kitchen.

Of course, there is nothing wrong with venues promoting the use of sustainable produce from the local area. It is an admirable dedication to providing a better future for everybody involved. But when multinational chains are boasting about the sources of their woefully inadequate supplies, more as cash grabbing marketing ploy than actual consideration for British farmers, everything can begin to feel a bit pulled pork and salted caramel. Yes, we get it, you’re doing that really popular thing that everyone else is doing. Good for you (ever so slight ‘Christian Bale having a meltdown on the set of Terminator’ voice).

Then you arrive at The Alan and realise just how important, fulfilling and wonderful this local sustainability can be.

Unassumingly located on Princess Street, just round the corner from the roast meats and rice of China Town, The Alan opened to a plethora of grid posts in February, all tastefully curated shots of exposed brickwork and brass industrial lighting. The tranquility exuding from their social media posts welcomes you as you step through the entrance foyer and into the dining area, where I take my seat at the open plan kitchen to discover more about the menu from the man behind it – Head chef Iain Thomas.

Systematically deseeding a pomegranate ahead of an oncoming table of 12 as I meet him, Thomas is fresh off a visit from a mightily impressed Jay Rayner and only too happy to regale me with the whereabouts of each location from which his ingredients are procured, from the magic of Nantwich’s Cinderwood Market Garden to his very own allotment in Hattersley. With a brief, donkey acquiring, Narco shifting detour to Colombia in-between. But more on that later.

“I try to keep everything as local as I can,” explains Thomas, a veteran of the trade since he was 16, taking in the kitchens of The Midland Hotel, The Refuge and Edinburgh’s Michelin starred 21212 among other notable establishments along the way. “Aztec Farms deliver fresh trays of herbs for me, then things like the parsley and the broccoli are from my allotment in Hattersley. On the menu there’s ‘Nana Betty’s rhubarb and custard. The rhubarb’s from my allotment too. We use Cinderwood as well. What they’re doing is amazing. Then we’ve got mushrooms from Polyspore, who grow them in Altrincham then deliver them by bike, so there’s no carbon emissions or anything.

“Our bread’s from Companio. Their Salford five seed sourdough is the best sourdough ever. So yeah, I try and keep everything within Manchester, Cheshire and Lancashire wherever I can. Obviously not everything can be sourced from these places so for some ingredients I go a bit further afield. I get Yorkshire feta, although it’s not called feta, it’s called fettle, but that’s all about getting the food miles down. I can get a great product from Yorkshire instead of having it shipped over from Greece.”

As Thomas rattles off his list of North West suppliers, the realisation of just how rich the region is in top quality produce is staggering. Yes, OK, it’s hardly a secret that the North, with its seemingly boundless rolling countryside, knocks out an impressive amount of fruit, veg and meat, but the depth of choice is akin to Pep Guardiola trying to select his starting XI every match day. Quantity and quality, wherever you look.

But all this luxury of choice being at a chef’s disposal is useless unless they know what to do with it. Fortunately for The Alan, they have a head chef who can pair back-to-basics simplicity with flavourful artistry.

“I like every dish to have a little story behind it, like my Nanna Betty’s rhubarb and custard, it’s got hobnobs on it, which is my Nanna’s favourite biscuit and little meringue sticks that look like those candy cigarettes you used to have as a kid, and I remember getting in trouble for pretending to smoke with them when I was little. So that’s why that’s on the menu. Then the cauliflower tikka has three nods in there. One, to the Curry Mile, which is only 10 minutes away in Rusholme, then to chicken tikka, which was, or still is, the most popular dish in the UK and then to Dundee, where I lived for a while, which was once the spice capital of the world, so it ties all three things together.

“The ox cheek terrine is amazing, with the dill pickle gel, which we make by taking the juice from the jars and thickening it. But then, it might be that we come up with something on the day. A supplier could say to me ‘oh I’ve got this and this if you want it’ and I’ll use it for a new dish that day. I get bored easily so I’m always wanting to freshen things up.“

This restless energy results in a selection of small plates brimming with character, reflecting the effortless elegance of their surroundings. Yes, there’s a sleekness to them, but one rooted in Mancunian industry and chutzpah. The glow of the heat lamps at the rear of the kitchen, maintaining the temperature of various herbs from Aztec Farms and Thomas’ Tameside allotment, give off a glow reminiscent of scientific experimentation, providing a suitable backdrop to the curiosity that seems to propel many of the chef’s ideas.

But how difficult is it to maintain such a high level of service and creativity while also controlling the aforementioned sustainability and locality?

“It’s hard work. Obviously not absolutely everything can be sustainable because of the way the world is, but I think we’re trying as much as we can and I’m learning more and more every week to see where we can go with it. With the allotment that helps a lot because I can keep an eye on everything there and can keep adding to it. For instance there’s bee hives there so we get honey from those. I mean, I don’t have anything to do with the bees ‘cos I won’t go near the bee hives but someone else does it for me. But it makes you realise how important seasonality is and how much commercial growers have ruined it. So with the project I’ve got in Hattersley, I can try and keep on top of that and learn more about the growing aspect too.”

And when something cannot be found nearby and a far flung adventure is required to land the perfect element, say when you desperately need the absolute best chocolate for your dessert menu, for instance, then why not offset that scouring of the globe and all those air miles and jet fuel by buying a herd of donkeys for the village in Colombia where it’s being grown?

“The chocolate is an amazing story. I use Luker, who are helping to try and drive the cocaine trade out of Colombia, leaving all this extra land. So they teach the farmers with all this land that they don’t know how to use how to grow chocolate and then they buy the cocoa off them. All the money is at source as well because the beans are all bought in Colombia, they’re not shipped in from anywhere else.

“I have a friend who works for Choc Affair in York, who supply me with the chocolate from Luker. One of the initiatives they’ve undertaken is buying bikes for all the kids in this village in Colombia where they grow their chocolate, so they can get to and from school. Only they realised the land was too hilly and boggy, so they took the bikes back off them and bought the kids donkeys instead. So although we can’t get zero food miles from chocolate, we can at least use a decent, honest company to buy from.”

So whether it’s directly being involved with the growing of the items that stock the prep benches every day or indirectly involved with chocolate infused cartel displacement and donkey rides in South America, The Alan is already proving to be much, much more than just a pretty face on instagram. It’s a hotel that can boast a kitchen full of soul and character, one which puts community first, whether that community is a few minutes down the road or in the forests of Colombia.

Through Iain Thomas’ experience and creative zest, The Alan can back up its abundance of style with a decadent wallop of substance. And, safe in the knowledge that the dining menus can also be enjoyed from within the comfort of one of the hotel’s 137 immersive rooms, there’s nothing stopping you indulging in their Arctic Roll from within the majesty of an Emperor sized bed, atop 200 thread count Egyptian cotton. If you need any more convincing after that sentence, then there’s no help for you. You need that experience in your life, just like you need to experience the rest of Thomas’ menu in all its locally sourced, sustainable glory.