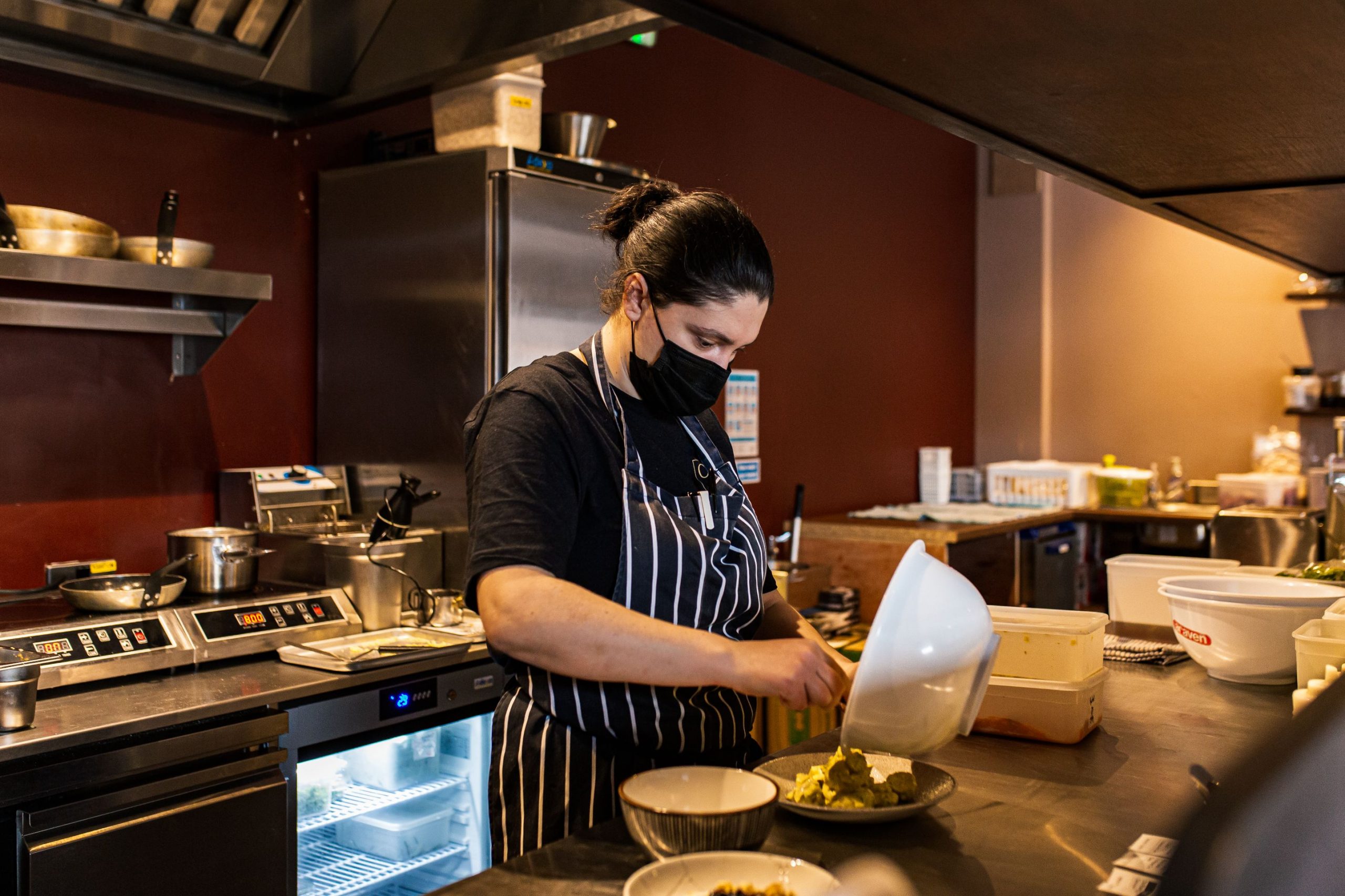 A Michelin-trained chef has opened a new restaurant in Prestwich, serving Scandinavian-inspired dishes in a relaxed setting.

Whitefield-born Danielle Heron is behind the new opening. The 28-year-old studied at Manchester College and went on to work in some of the best restaurants in the world including two Michelin-starred L’enclume in the Lake District and three Michelin-starred Maaemo in Oslo.

Now, Danielle has decided to come closer to home to open her first solo venture alongside co-owner Sofie Stoermann-Naess, who she met at Kolonihagen Frogner, a neighbourhood restaurant, also in Oslo.

OSMA has now been open for three weeks, but Danielle and Sofie had originally planned to open in May, receiving the keys to the restaurant on March 1.

Obviously lockdown happened, which stalled plans a little, but walking into the restaurant, there’s a real buzz about the place and it seems as though it has been worth the wait.

It is the latest new opening in Prestwich, adding to the increasingly impressive list of restaurants and bars, which is making the area a real destination for food and drink lovers.

Taking over what used to be the Diane Berry kitchen showroom in Prestwich, Osma’s interior more than lives up to its previous occupant’s vocation.

The restaurant is split into two parts. One side, the main dining area, has dark blue-green walls, floor to ceiling windows and a large black sharing table in the middle of the space, which has been split into sections to allow for social distancing.

Hovering above the table is a cloud of dried flowers, suspended by transparent thread so it really does appear to float.

The other side is light and airy with pastel coloured walls, pink and gold chairs, large booths and a long bar.

A relaxed affair, the Scandinavian-inspired menu features a regularly changing selection of open sandwiches and fresh salads which cost between £7 and £8.50.

The open sandwiches are served on the infamous Pollen bakery bread with toppings such as; roast topside of beef with cucumber, crispy onions and horseradish; toasted rye with shrimps and soft boiled egg; and tuna marinated in roasted jalapeno.

The tuna is perfect, small cubes of fresh tuna loin, which is lightly smoky and spicy but not overpoweringly so. Served simply on toasted bread with a sprinkling of raddicchio leaves, it truly doesn’t need to be any more complicated than that.

Salads include spicy crab with coriander and edamame, confit chicken leg with romaine lettuce and a parmesan dressing, and baked beetroot with avocado and feta.

The ingredients of the salads are tossed together meaning that each bite contains the perfect amount of each and every element.

Three nights a week (Thursday to Saturday), OSMA operates as a ‘food-bar’ serving a frequently-changing menu of small plates, accompanied by funky wines and creative cocktails.

While the daytime menu sticks fairly closely to the Scandivian style, the dinner menu takes influence from a wide range of cuisines.

One of the dishes on the menu currently is ceviche, inspired by Danielle’s time in the Peruvian capital, Lima. They’ve also had Japanese-inspired dishes in the past.

Sample desserts include croissant bread and butter pudding and roasted plum crumble with crème anglaise (both £5).

Owners Danielle and Sofie said: “OSMA will use ingredients from local British farms and producers, showcasing their products in their purest form by letting each ingredient speak for itself.

“Seasonality will naturally be a big part of how we design our menus and will influence the interior of the space.

“Our goal is to provide healthy, creative, tasty food with influences from around the world, building on the experiences we have gained over the years working and travelling.

“It’s great to be back home and see the buzz about the neighbourhood, which features plenty of independent restaurants. We are excited about getting going and serving the community some great food in a friendly, relaxed environment.”

“OSMA has been designed to attract every walk of life and offer something for everyone. You can dine at a window table, in booth seating or sit at the bar to watch the chefs working.

“We also have a large communal table with power points, perfect for a fast working lunch, as a social meeting table for cocktails or for larger groups out to celebrate.”

OSMA is open for breakfast and lunch Tuesday and Wednesday (8am to 5pm) and all day the rest of the week; 8am to 10pm Thursday and Friday; and 10am to 10pm Saturday and Sunday.

For more information and to view the full menu visit: osmakitchenbar.com