10 Festive Sandwiches To Try In Manchester 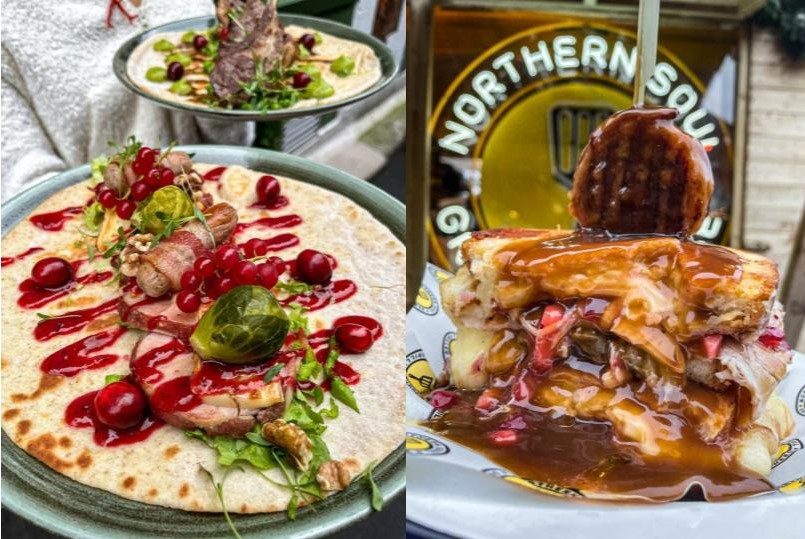 I’m an absolute sucker for a festive special. Mix in some turkey, sprinkle on sprouts, douse it in cranberry sauce and drizzle on the gravy and I’m a happy gal.

I’m not averse to a Greggs’ Festive Bake or a supermarket sandwich, but alongside these chains, some independent restaurants, cafes and bakeries in Manchester have created their own seasonal sandwiches.

Here are 10 Christmas special sarnies you can get your hands on this festive season.

The Merry Bingmas is filled with roast turkey, bubble ‘n’ squeak croquette, nanna Barry’s ‘famous’ braised red cabbage, paté and spiced cranberry sauce. The sandwich is served with a pot of gravy for dunking and you can also add bacon if you like. The veggie version has cauliflower karaage and chestnut paté. Plus, there’s a prawn cocktail festive special too which looks sensational.

Find it at General Stores in Ancoats. Keep an eye on their page for more details.

You’ve all heard of it, it’s the infamous Yorkshire Pudding Wrap, made by Porky Pig Carvery on the Christmas Markets. Ok, ok. I know what you’re about to say. It’s not a sandwich, it’s a wrap. I hear you, but it’s also a Yorkshire pudding and if it’s got a filling ‘sandwiched’ in between a bread-like exterior, it’s coming on the list.

The mammoth wrap begins with a giant Yorkshire pudding, which is then loaded up with shredded turkey, stuffing, carrots, peas and thick gravy. It’s then folded, grilled and served.

Northern Soul‘s Crimbo Dinner grilled cheese is back, but not at the Manchester Christmas Markets this year. Instead, they’ll be serving it at their Tib Street store and at Escape to Freight Island’s Winter Island.

The grilled cheese is filled with crown of turkey, gravy, Pink Lady stuffing, cranberry sauce and topped with a gravy-soaked lollipop. It’s nothing short of majestic. Check out more on their Instagram.

Having recently moved into their new restaurant in Withington, Herbivorous has just announced its festive specials dishes for this year which include a turkey (made with seitan) and stuffing burger, cheese fondue fries and fries loaded with seitan turkey, gravy, cranberry and red cabbage.

The Christmas menu is available from 1st December. Book a table at their Withington restaurant here. The festive specials are also available at Hatch.

Bundobust has confirmed they will be bringing back their sprout bhajis and their ‘seminal’ sprout bhaji butty which consists of a patty made with sprouts, broccoli and onion served with fennel and chilli salad and cranberry chutney in a vegan brioche bun. Plus, £1 from the sale of each Sprout Bhaij Butty will go to a local charity.

They’ll also have a festive curry made with winter veg in a warming tomato and coconut sauce and Christmas Kulfi flavoured with nutmeg, cardamom, cinnamon and orange peel. Christmas cocktails and mocktails include Coconut Hot Toddy, Massala Chaas with brandy, Baileys and their house chai, and Ginger Tom (non alc) which is a mix of Ginger ale, cranberry, apple, cinammon, lime and mint.

A bit more of a classic Christmas sandwich, this one. Trove‘s turkey sandwich is topped with red cabbage sauerkraut, emmental cheese, Russian dressing and pickles. It’s served on their white sourdough and looks bloody gorgeous.

It’s available at their Ancoats, Levenshulme and Marble Street cafés.

The Berlin-style donner bar run by a Michelin star chef, One Star Doner Bar, has launched a Christmas shawarma special on their menu at Escape to Freight Island.

The kebab is packed with turkey and stuffing with paxo mayonnaise, cranberry hot sauce, shredded sprouts, onions and cabbage. Its served with a side of potato smileys, because potato smileys are ace.

We’d also recommend ordering a side of crispy chicken nuggets with hot mayo sauce. Because, fuck it, it’s Christmas.

Bab has launched a Christmas menu this year, with no less than four festive babs and two sides. The babs include: roast turkey with cranberry and chilli sauce; lamb chop with green peas and mint sauce and butternut squash with sprouts, beetroot and cheesy chilli sauce.

They’re also serving pigs in blankets and Yorkshire puddings with gravy as sides. And there are Bab hot chocolates, piled high with whipped cream. Open every day. For more information and to book, visit their Instagram page.

The Christmas menu at Parmogeddon in Hatch features a Christmas butty with one of their parmos topped with bacon, melted brie and cranberry sauce rocket and house pickled spicy slaw on a toasted brioche bun.