An ode to one of the city centre's most beloved institutions... 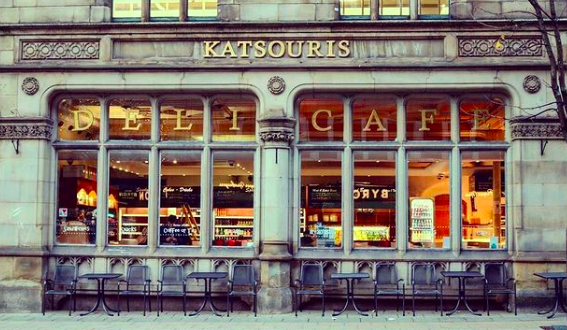 It’s grey. Of course it is. The charcoal underbelly of the early afternoon clouds sags southwards, ever closer to street level. A seemingly ever present imminent threat. The hi-vis brigade jostle for position with office workers, faces flush with post-WFH gloom, at the pedestrian crossing, anticipating the change from red to green as if awaiting the starting pistol of the Olympic 100m final. The Yotel doors open, finally allowing for the emergence of bleary eyed stop outs, foreheads bathed in a tequila flop sweat, tongues protruding en masse akin to a collection of exhausted labradors, beckoning hydration towards them.

You avert your gaze contentedly towards the counter in front of you. Your plate piled with sumptuous Spanish rice and freshly roasted carvery meat. The chaos around you only serving to intensify the zen within you. It’s another Wednesday lunchtime at Katsouris deli and there isn’t another place in town you would rather be.

All grand, old European cities must, as a point of absolute necessity, be in possession of a flamboyant, architecturally ambitious delicatessen. Multiple, in fact. Manchester, for whatever reason, seems woefully thin on the ground when it comes to grandiose establishments from which to procure a smorgasbord of charcuterie while you ogle legs of ham hanging from the ceiling and wheels of pungently aroma’d cheese big enough to fit a fucking Range Rover. So it is with the sincerest gratitude that thanks is offered up to Katsouris and its 16 years of service to the city centre.

Located on the corner of Deansgate and John Dalton Street, Katsouris is housed within well worn 19th century gothic stonework. From its exterior, all gold typeface encased within lofty windows, beckoning starving pedestrians inwards for a half ciabatta that could quite easily double as a pillow for a post-work commute power nap, Katsouris could be resituated to Athens, Barcelona, Bologna or Paris and remain identical without alerting any suspicions from locals. Inside however, it’s a different case entirely.

While some seriously questionable (albeit charming and atmosphere enhancing) opera warbles over the speaker system, the realisation once you step foot through the rather ornate entrance is that this is in fact a Manchester market caff that once went on a holiday to the Med in the ’70s and never wanted to return. The deli counter doesn’t sprawl like it does in the centuries old institutions of Italy, Greece and Spain, but the menu is a seismic work of art large enough to command its own fucking postcode. An interior consisting of grey and blue striped couch style seating may not be wowing any aesthetic junkies, but it radiates familiarity. It’s a Greek cafenion by way of Bury (where the original Katsouris still proudly stands in the town’s famous market), delivering Southern European ambience with a North Mancunian attitude.

The girls behind the counter debate what time they will each take their breaks across a rapidly increasing number of customers, while an unseen voice from the kitchen queries how far off the carvery station is from being at capacity, with orders beginning to diminish the supply of turkey, gammon, peri peri chicken, paella rice and continental sausages. Flour flies off the freshly cut crusts of ciabatta, the pillowy innards moisturised with butter before a deluge of roast pork liquifies it into every pocket within the porous Italian loaf. Some are sent into the eager hands of those who need to leg it back to the office for an emergency feast before spreadsheets begin to dominate their eyelines once again. Others are slapped in front of diners who have nowhere else they need to be. Delighted that they’ve managed to snag a seat before the carnage ensues. Crockery and cutlery clatter together amid the rapid-fire chatter and chews of yet another throng of lunchers, the majority of whom have been patronising this beloved spot for the best part of its decade-and-a-half existence on Deansgate.

It is the carvery counter that began my own long, sordid love affair with Katsouris, back in the Advent of 2006. An early December stop on the way back to Castle Irwell student village, where I would no doubt be wiling away an afternoon avoiding another boring-as-shite lecture on radio editing to instead focus on a twelfth viewing of The Big Lebowski and a further run through of Lupe Fiasco’s Food & Liquor (still bangs). A turkey, stuffing and cranberry half ciabatta was ordered up, a reprieve from the baltic winds howling through the centre of town. Watching this masterpiece being constructed, I knew there was no chance it was being risked in the squeeze of the 93 bus journey back to Lower Broughton. It demanded to be savoured.

As far as introductions go, it was up there with Cameron Diaz showing up in that red dress in The Mask. Jim Carrey jaw dropping reacts and all. The turkey so succulent, the cranberry and stuffing intertwined in a sweet and savoury embrace, like long lost friends who have just bumped into each other outside the pub toilets after seven pints. A customary can of Fanta lemon knocked back after the final morsel has been devoured. It was an instantaneous knowledge that this was to be a regular haunt that made the experience so satisfying. Sixteen years later and each return is as welcoming as the last.

The window seats to the right of the main entrance are a must if available. Providing some of the best people watching opportunities in the city, whether it be a mid-morning viewpoint accompanied by a Big Kat breakfast or a lazy late afternoon sojourn with a mezze platter and a coffee. Somehow, I don’t believe I’ve ever parked myself at those seats when it’s been anything other than thundercloud grey outside. It almost wouldn’t make sense to be perched there when it’s cracking the flags. Katsouris just lends itself to the security of being secluded away from the outside world. You can observe the hysteria from within its four walls, arming yourself with a full stomach before venturing back outside into whatever gale force pandemonium awaits.

But before you leave, you should always make sure to take an edible souvenir or three with you. The aforementioned deli counter, while rather diminutive, still boasts considerable quality. Mortadella, salami, stuffed vine leaves, sun dried tomatoes and the like can be sourced from here, of course, as can a multitude of freshly prepared salads from the bar to the left. But what you want here are the sweet goods. Those cannolis demand your attention, as does the flaky, sticky baklava. Leave without it and you’ve gone seriously wrong. Each bite another reminder of how you simply must keep coming back here.

Opposite the deli are shelves piled high with dried pastas, Italian cakes and sauces. Once the post-lunch lull arrives, these are well worth a peruse as your stomach tries to handle digesting a Lamb Siciliana or Zorba The Greek without knocking you into a two-hour long coma. Studiously monitoring these shelves was often a student era routine of mine around 3.30 in the afternoon between 2006 and 2009, when I became aware of the knowledge that the few remaining cold sandwiches in the fridge would soon be available on a 2 for 1 deal.

Not wanting to be too obvious with my desire for half price sarnies, I would pretend to be keenly interested in ostentatiously packaged bags of multicoloured farfalle, paccheri and Strozzapreti. Slowly I then meandered to my right, throwing a cursory glance over the ‘Greek Lamb Special’, ‘Chicken and Bacon Club’ and ‘Oriental Chicken’ to see what took my fancy. Then my line of vision landed ever so subtly (like a fucking sledgehammer) on whichever member of staff looked most agreeable to helping out a depleted looking university student. With all the speed of a snail who’s shell has been filled with cement, I would hold a sandwich up to my knackered, clumsily shaven face until I heard the immortal words “Those sandwiches are 2 for 1 now, y’know…”. And just like that, my next two meals were acquired. Whether this offer is still in effect is knowledge I unfortunately do not possess, but maybe give it a go anyway and see what happens.

With Deansgate becoming a soul crushing ghost town as you approach from the Cathedral side of the city, you’d be forgiven for veering away to an area less bereft. The former Lunya and Barburrito sites still sit empty, crying out for new owners to come in and revitalise a tragically flagging strip. A few footsteps further forward, though, and Katsouris serves as a gateway to more affluent times ahead. The wonderful new Mews only a couple of minutes down the road, along with Hawksmoor of course, a permanently bustling Federal and forever welcoming Dimitri’s taverna. Once you reach Katsouris, while the grey clouds physically may remain overhead, they cannot maintain a dampened spirit. Step inside, grab a window seat and feel very smug, satisfied and optimistic about what lies ahead.