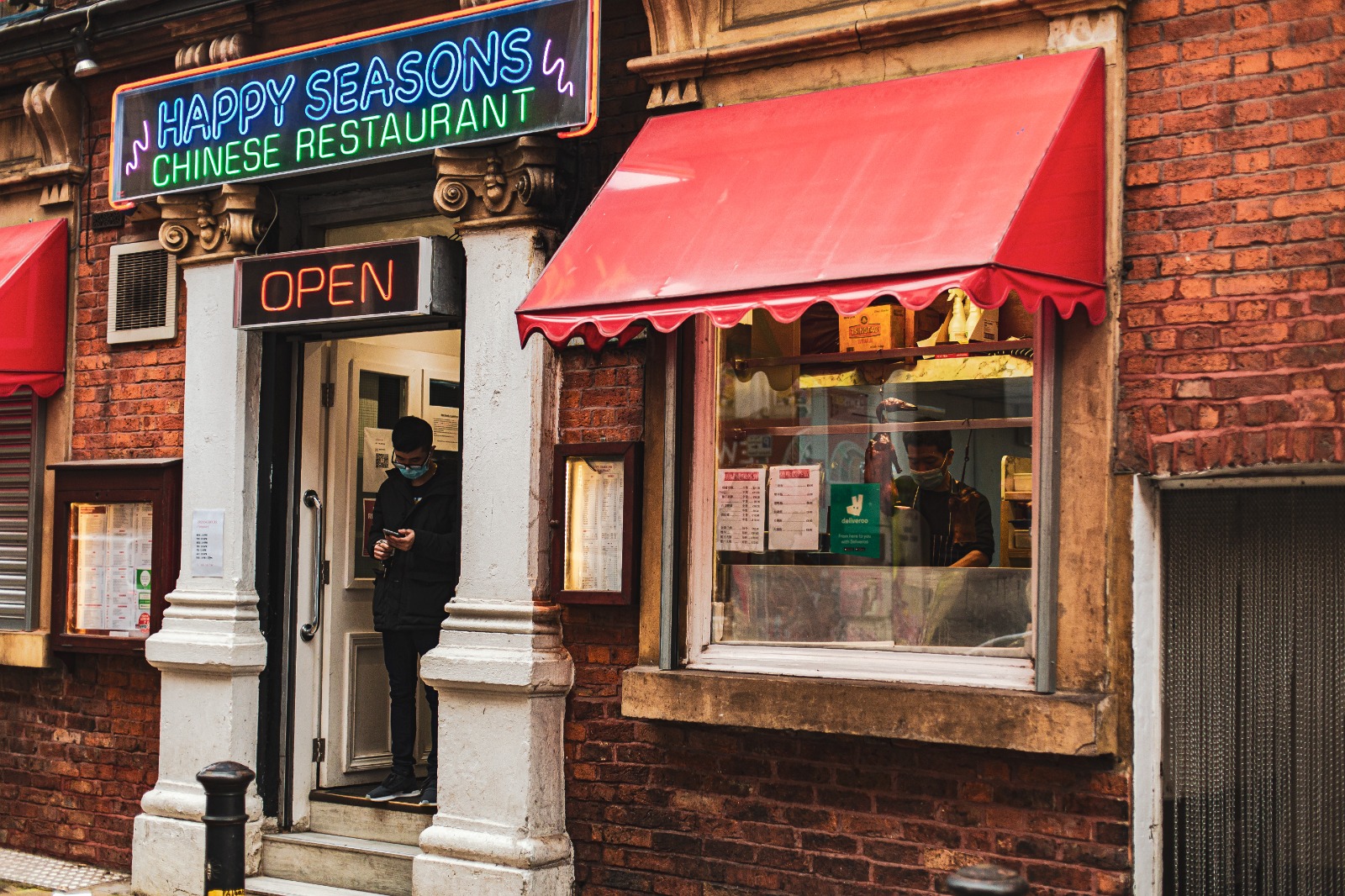 The thunk of heaving oval plates, piled high with densely coated udon noodles and mountainous, char siu crowned pillows of jasmine rice, hitting elderly yet steadfast formica tables punctuates the cluttered air amid the hotpot of rapid fire Cantonese chatter and low Mancunian rumbles. Students and pensioners sit side-by-side, one generation utilising their reading glasses to remind themselves of the menu, the other studiously scrolling instagram to jostle their memories of what dish looks most appealing.

Between the social media scouring clientele, the neon exterior and the fish tank featuring interior, Happy Seasons could easily be situated in 1988 or 2021. A no nonsense throwback that suddenly finds itself flung headfirst into the most modern trappings of the 21st century.

The Faulkner Street stalwart has held its own in Manchester’s China Town for 25 years. A quarter century of roasting meats and filling seats. But now it has opened itself up to a new generational pull. And everyone wants a plateful.

Between July 4th and September 22nd, 2020, Happy Seasons’ official instagram account posted 18 times, understandably wishing to capitalise on lockdown restrictions easing by tempting customers back through their doors with photographs of all their trademark dishes.

And while business remained steady, it cannot compare to the deluge of interest that has been generated since the account relaunched in June of this year.

Pre-pandemic, of course, you could often expect to be greeted with queues veering all the way down Faulkner Street, with regulars patiently waiting for their sumptuous roast duck, char siu and crispy belly pork. But with those queues no longer forming, more modern measures had to be taken, and Happy Seasons rapidly rose to prominence on the instagram feeds of, seemingly, every-fucking-one in Manchester.

Enlisting the help of Jay Tran, of subterranean Vietnamese den Pho Cue on the opposite side of the street, Happy Seasons’ signature sauce laden creations were given new life, receiving wall-to-wall coverage on feeds and stories alike. A masterstroke in marketing that even a menu revamp or restaurant refurb couldn’t replicate.

Owner Kevin, sitting down with us during a pretty well populated afternoon service, explains that even some of his older regulars have noticed their old haunt receiving more mainstream coverage.

“We have regular customers coming in now saying ‘I saw you on instagram!’, they’ve seen all the posts going out and now we’re getting a lot more people coming in saying things like that. It’s a lot more popular. They want the dishes they’ve seen on the posts, which is really good.

When your insta bio reads ‘THE KING OF ROAST MEATS!!’ you really need to be ensuring it’s a bit more than mere hyperbole. And Kevin’s roast chef, a mysterious figure who is only alluded to in our conversation, is churning out the finest cuts of BBQ’d Cantonese meats in the city.

“The roast chef had already been here for many years before I arrived,” explains Kevin, who himself has only been at the helm of Happy Seasons for five years, having left his job as a restaurant manager in the Trafford Centre to take the reigns on Faulkner Street. “I think he’d been here for 12 years, so I could concentrate on managing the restaurant and leave him to do the roasts.

“There’s no big secret about the roasts, it’s just down to putting a lot of attention into the preparation. The roasts are prepared the day before from 7am, every day, so the day after, when they’re gone, that’s it, you can’t do any more. Day-by-day, day-by-day, non stop. It’s not easy, it’s hard work. Some customers don’t understand that we can’t just make it quickly. We have 40 ducks prepared and once they’re gone, you’ll have to come back the next day for one.

“Some customers say ‘oh we’ll wait’. How long are you going to wait? Sit there until tomorrow?”

The ducks themselves greet you from the street, hanging in the window like a band of outlaws, strung up by the sheriff in an old western. One-by-one they find their way onto the chopping board and then onto a bed of jasmine rice, beautifully corrupting it’s pristine whiteness with their soy infused juices, making everything that much more murkier and delicious. Throw in some char siu, maybe some soya chicken or belly pork and once that is places under your nose, you’re not looking up for the next 20 minutes.

Yet the roasts, famous though the may be, both on and offline, are far from the only reason to walk through the doors at Happy Seasons, as Kevin’s wife Fiona proves, serving up a banquet that our table almost buckles under.

Deep fried salt and pepper pork chops, crispy Szechuan chicken, char siu udon noodles with spring onion and garlic, prawn wontons, Morning Glory stir fried veg, salt and pepper ribs, crispy pork belly and a whole heap of soya chicken, complete with ginger and garlic dipping sauce is presented to us and we wonder where to even start. The colours of each bowl and plate are almost pre-filtered, the vibrancy of the crimson Szechuan spiced chicken almost chaotically violent when paired against the springtime greenery of the Morning Glory. And the medley of odours swirling between the plates causes carnage in our nostrils as we ponder where to start between anxious sips of Tiger. It’s a full blooded assault on the senses, make no mistake.

“Our food is more Cantonese style, like you get in Hong Kong” Kevin tells us, as we chopstick our way through the insanely good salt and pepper pork chops, “Mainland food is spicier, more oil. Szechuan chicken is more mainland. We didn’t use to have this dish or the spicy broth with the brisket, but our Chinese customers started asking for spicier food.

“The last 5 -10 years, more people from mainland China have moved to Manchester, and England in general. Before that it was all people from Hong Kong, but now the people who originally moved over from Hong Kong are retiring and there’s no one to take over because their children don’t want to own restaurants. The children see their parents working in restaurants and takeaways, working long hours, they don’t want that. They want to spend time with their families. Plus, with working visas are easier to get from mainland now, places like Hunan, you get more people coming over and opening up restaurants.“

Born on the mainland himself, in South China, Kevin moved to Manchester with his parents at the age of 16. And while his parents later traded the North West of England for Brooklyn, New York (a snippet that made Paddy excitedly exclaim “New York!? THEY LIVE THERE!?…WOW!” with the childlike exuberance of Father Dougal Maguire), Kevin made a pilgrimage around the UK, taking in Bristol, Blackburn, Halifax and then Manchester again.

In this time, and the five years he has headed up Happy Seasons, he has seen tastes develop and evolve, with the space between his English and Chinese menus, both roughly the same length as War and Peace, getting closer and closer all the time, moreso especially in recent months, with insta inspired patrons demanding the most authentic experience possible.

“Most English people didn’t order from the Chinese menu. But when the restaurant is packed, you see a table of students sat next to a table of Chinese people and they have a look and say ‘oh, what’s that?’ on the Chinese table, and they want to try it. They unlock the Chinese menu that way and that way they know what to order next time they come in.

“We have some regulars now who come in, English people, who know what they’re ordering off the Chinese menu, so they’ll say ‘I want the salted egg beancurd’. So we are looking at adding more Chinese menu items to the English menu.

Once again, the social media hype is fully on display with people’s orders. A trio of students on the table to our left order up and slurp down some Dung Yam seafood soup in short order, while a middle aged Mancunian couple to our right enjoy the heady delights of the spicy brisket broth.

Fiona spares our blushes as we struggle to overcome the insurmountable odds stacked in front of us. There is no way we can polish off the deluge of deliciousness that has been so generously delivered to our table. She bags everything up as a round of naps is contemplated.

A little while later, I share a handful of snaps of our meal to my instagram story. The notification pings are almost instantaneous. The love heart eye emoji reacts are there, the simple ‘YES’ replies and various other impassioned responses telling me all anyone needs to know about the renaissance that has been undergone atop Faulkner Street over the summer. Happy Seasons has become one of the city’s happiest places, for both the older generation and the new.