Campagna: The Creameries’ Ragu Based Renaissance

A love letter to meat sauce and the bread to mop it up with... 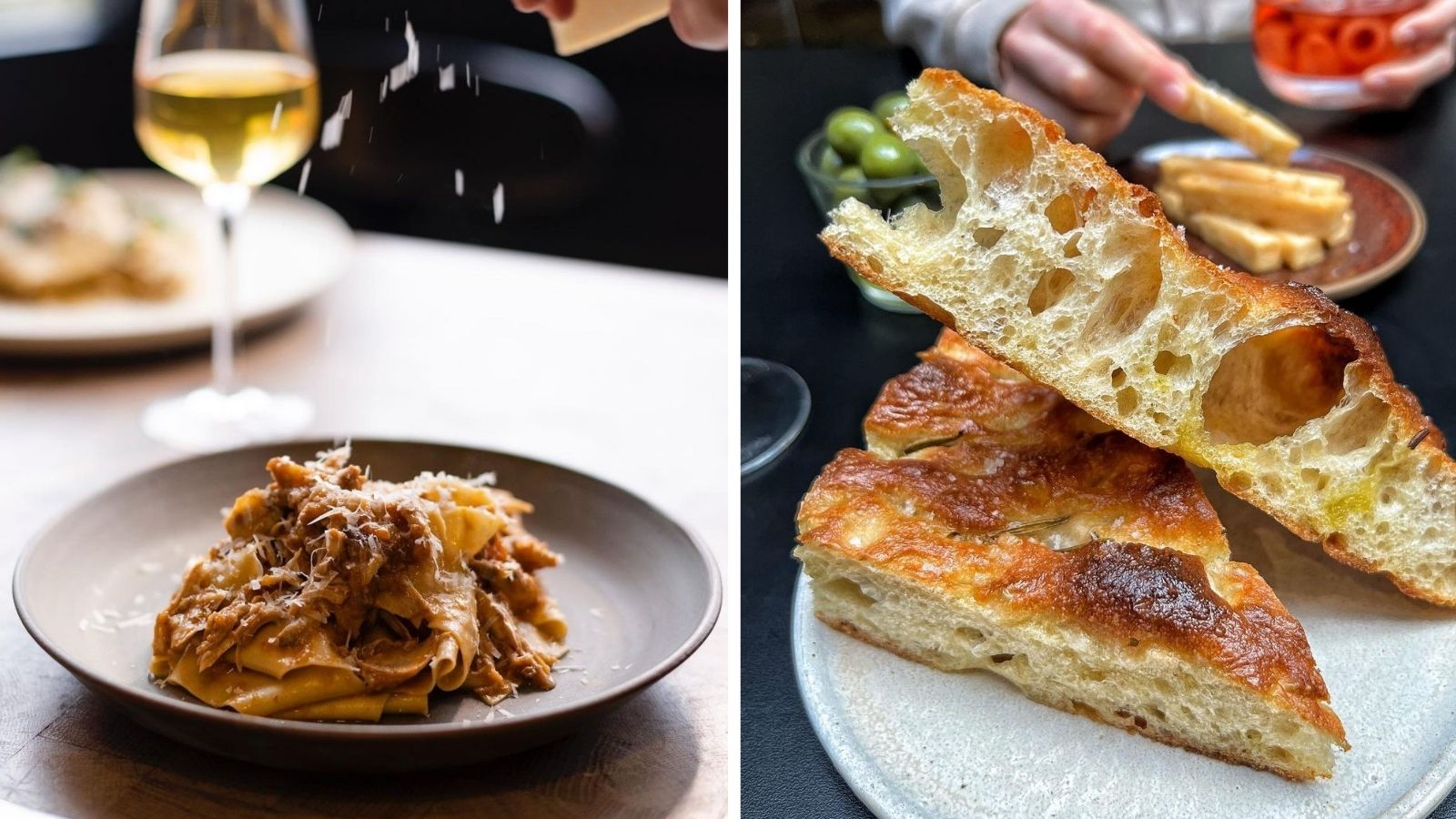 The time is approaching 11pm. I am, by this point, about a carafe-and-a-half of wine deep, exhaling contentedly and surveying a scene of half empty glasses and plates scattered with the remaining crumbs of hazelnut torte. Conversation around the table sways from Manchester United induced nervous breakdowns to how soul crushingly shit the new Matrix film was, via a multitude of banal, nonsensical other subjects inbetween. However far flung the inebriated talking of shite gets though, it still circles back to one evening defining constant. That fucking ragu.

Situated in the dining area of Chorlton’s Campagna (what was until very recently The Creameries), an eager gathering of press and media types have resolutely demolished the overhauled Southern European menu, the brainchild of chef Mike Thomas, inheriting the reins in the kitchen of the Wilbraham Road favourite from Mary-Ellen McTague, who is taking an incredibly well earned backwards step from food operations at the restaurant.

From moreish marinated Sicilian olives through to perfect, rosemary salt flecked panisse onwards towards blisteringly good roast candy beetroot and kohlrabi salad and a confit duck leg wit puy lentils that, during any other meal would emphatically, beyond a shadow of a doubt be the show stealing dish, it is the ragu, all sumptuous beef shin entwined with lustrous, freshly rolled ribbons of golden pappardelle, that dominates post-meal discussion and, as a result, will similarly dictate the direction of the remainder of this write up.

See, to fixate on one dish out of the six served may seem insulting to five lovingly crafted plates of expertly prepared Southern European cuisine, but this meat sauce mania is by no means a discredit to a menu that is a pint size parade of heavy hitters, each one an absolute victory of technique, taste and effortless simplicity. I would strongly urge anyone and everyone to make the pilgrimage to Chorlton to indulge in The Creameries’ shift away from taster menu (which, it has to be said, will still be sorely missed) to comforting, rural European cooking (as their instagram post states, ‘Tomato Europe’, not ‘Potato Europe’).

But back to the beginning. After a welcoming glass or two in the bar area, we’re invited to take our seats, being led past the open kitchen and, most importantly, the industrial size sheet pan heaving with freshly baked focaccia, the aroma of which wobbles the knees. It’s an uplifting warmth that stirs memories of weekends in Emilia-Romagna and Rome, capturing the scents of the cities at the crack of dawn as the sunlight begins to illuminate their ancient cobbles and brickwork. Campagna’s olive oil infused pillow, glistening under the moody radiance of the restaurant’s low level lighting, engulfs each table with a perfume fresh from the neighbourhood fornos of everywhere from Liguria to Puglia.

The contrast of crunch and air pocketed, cloud like softness sets the stage for what will arrive in three courses time. Previously, in house sourdough had been produced and paired with cultured butters of varying flavour within The Creameries four walls to devastating effect, so it is a relief that this noble tradition is being continued at Campagna with their furiously good focaccia.

The only negative to the experience on this evening is that the bread disappears within a few rapid mouthfuls, leaving everyone bereft of a vessel with which to soak up the sauce to come. Of course, during a regular service, this is a simple fix – Just order more focaccia from the bar snacks menu and once that final fling of pappardelle is digested, you can set about honouring the fine Italian dinner table ritual of Fare la Scarpetta, in which a hunk of bread (scarpetta aka little shoe) is selected to mop up the delicious remnants of your meal. Of course, the caveat to this is a lot of Italians save their scarpetta usage for behind closed doors rather than in public. I am here to tell you though that if you choose to be ‘polite’ and refrain from cleaning up the final bits of bovine brilliance from Mike Thomas’ ragu, then you simply don’t deserve pasta. Not even spaghetti hoops. You can settle for the ‘Henry Hill in witness protection egg noodles with ketchup’ and be happy with it. This big, mucky beef shin deserves to be enjoyed right down to the final drop.

And when it finally arrives there comes an involuntary hush. This is what we are here for. There are, of course, a few non-meat eaters who are more than well looked after with a Fazzoletti embraced by a walnut sauce, a dish that earns a series of satisfied smiles within the first mouthfuls. But returning to the carnivorous offering, there is an unspoken acceptance among those of us about to immerse ourselves in it that this is the main event. Again, not to disparage the succulent, crispy skinned, melt-in-your-mouth confit duck that was still to come at this point, but it is impossible to look past a classic Italian dish of slow cooked beef shin ragu as anything other than the showstopper.

Forks are readied before plates have even hit the table. This is the dish Campagna have been championing since day one. A wild rabbit alternative is available and also, obviously, high upon my ‘to do’ list. But on a frostbitten February night in south Manchester, we are bestowed the beef shin, sourced from the masters at Littlewoods Butchers in Heaton Chapel. The meat is plentiful and slow cooked to utter perfection. The ragu is rich, deep and delicious, just oozing with flavour from every fibre of its being. We’re talking deeper than an earnest, 4.30am at an afters philosophical, meaning of life level of deep. As for the fresh rolled pappardelle, coated and crowned with this handsome bastard of a sauce, it’s egg yolk yellow strands are just as pleasing on the eye as they are on the tastebuds, subtly complementing the ragu with a faultless al dente contrast to the tenderness of the meat.

There is a photo that occasionally does the rounds on a lot of those ’90s nostalgia driven instagram pages. You know the ones, they remind you of a time when the world wasn’t ending. Well the photo, shot by Mark Seliger in 1995, is of Benicio Del Toro and Parker Posey in a red and white checkerboard tablecloth Italian restaurant. Del Toro is firing a look off camera that suggests a fellow diner’s throat is about to meet the business end of his fork. Posey’s face, on the other hand, is ecstatically sucking up spaghetti, her eyes rolling into the back of her head like The Undertaker. It is an expression that encapsulates the euphoric joy a simple pasta dish can bring. A glazing over that takes you out of the room momentarily, back to a simpler time perhaps, evoking memories of meals your mum or dad or grandparents cooked for you. This ragu is the meal you cook for someone you really care about and clearly, Mike Thomas cares about every diner who walks through the doors of Campagna, because his effort is utterly sublime.

An undeniable wholesomeness permeates throughout Campagna. It obviously already existed at The Creameries, being the welcoming neighbourhood institution that it was, but now there’s an increased sense of familiarity with the new menu. A family attachment with the ragu (and, by proxy, the Sunday Al Forno menu’s lasagne) at the heart of it all. You want this dish when it’s pissing it down outside, you want it when it’s cracking the flags. You want it surrounded by the people you love, you want it on your own with a bottle of fucking great red wine and a knackered, dog eared paperback. You want it over and over again because it is a dish you will never tire of. You want it because it has been cooked with care and attention in the same way it would be at home.

And whatever you do, don’t forget your scarpetta.