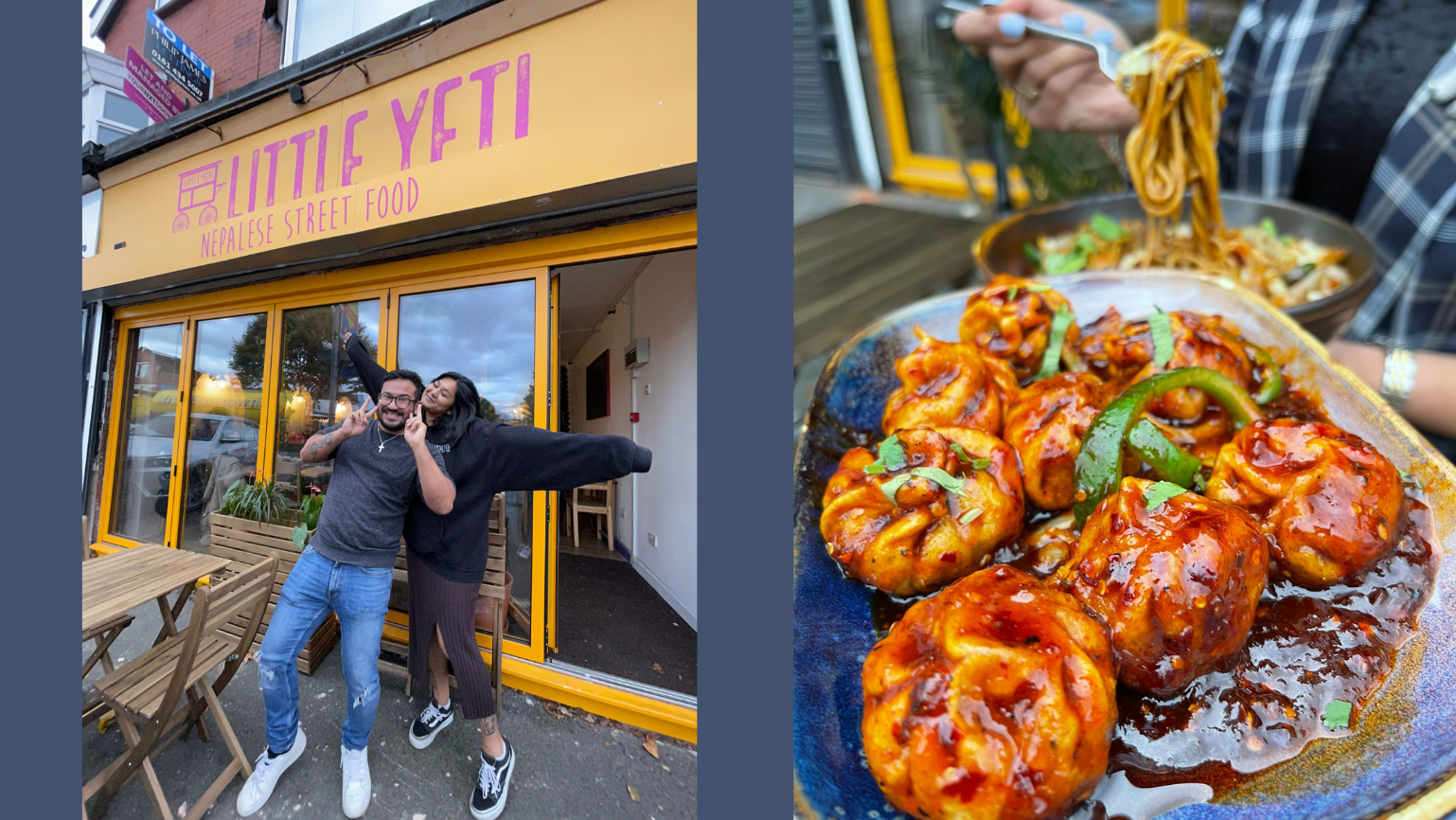 Siblings Niti and Nanny brought the Little Yeti Nepalese street food to Chorlton 3 years ago and it’s… not your typical Nepalese restaurant. Walking into the bright, airy interior with exposed brick and winding foliage, the piped in Incubus track from their 2000s Kerrang! Playlist is the cherry on top of this very unique spot. The Little Yeti’s is a story of navigating two identities and cultures, with the outcome being some of the best food I’ve eaten in the most breezy and unpretentious setting.

What can you expect to eat at TLY? Nostalgic tastes and textures dictate the menu here, with each dish’s development starting off with the preface ‘do you remember when we ate this?’ It was a combination of trial and error, and the secret language of siblings; Niti is quick to stress that this is a joint effort of both the family and support from the wider Nepalese community. ‘All of it is personal and reminiscent of things we grew up with.’

It’s important to note that while the items you’ll find on TLY’s menu are recognisable, some sort of wizardry happens in the kitchen that makes these familiar dishes so, so insanely good. Vegans can rejoice, as one whole page of the double-sided menu is veggie-vegan, which is refreshing to see. The Paneer Shashlik sizzles and sings with cumin, garlic and peppers. The vegan Chow Mein, while not a dish I would ever order based on past disappointments, is a total remix job: it’s fresh, flavoursome and has none of that gross oily film that you can get. The creamy lentil daal is hearty; the bhajis here are like no other lover – crispy and light and so effing moreish. There’s not one thing I’ve tried here that wasn’t a pleasant surprise

But if I could sum up the TLY menu for you, it would be one word: Momos. Tbh the momos here – both meat and vegan – need their own appreciation post because I simply can’t do them justice. So generously-filled, with the most pleasingly-chewy pleated dough. Niti tells me that, in true community spirit, she employs a couple of local Nepalese students to pleat the momos on a part- time basis, which definitely beats a paper round.

Back to the momos. Their meat is tenderised old-school, using papaya instead of chemicals so when you bite into a steamed pork momo, the juice just squirts out of the gelatinous, addictively- spicy parcel and – It’s almost pornographic this, sorry.

Now, I’m going to let you in on a secret momo to try: while they have achar (spicy tomatoey sauce that is a staple in Nepal and India) and garlic sauce options for your momos, if you ask for your order to be fried in chilli oil, you’ll be gifted with what I’m going to commit to here as the best momos I’ve ever had. Ever. Look at that chilli glaze. The GLOSS. Order a couple of these because even though they’re generous with the portion-size, you’ll be really sad when it’s over.

Despite neither being a trained chef, Niti and her brother Nanny grew up around the hospitality industry with both parents working in restaurants as waiters and chefs before opening the Gurkha Grill in Didsbury, and the Kantipur in Stockport. They spent a lot of their childhood being looked after by their grandma, and Niti starts to reflect on the external influences and experiences that shaped her formative years as a ‘second-generation’ child of immigrants.

“When you don’t see your parents often and you’re obviously from a different culture that isn’t the one you’re growing up in, It gets a bit confusing, doesn’t it?

It was really, really bad, the abuse we got, and just for being brown”

In order to survive, Niti and Nanny had to assimilate and become the most ‘westernised’ version of themselves – but that’s not without its own repercussions, particularly from the Nepalese community

“We grew up somewhere in-between, not English enough and not Nepalese enough… we found it very difficult to have that positive association with our culture, because for the most part, we were taught that we should be embarrassed about where we come from.”

So, what started to change Niti’s self-perception and helped her to begin to un-do the internalised racism she grew up with? Momos, of course.

Niti’s journey has made her unapologetic in her dual-identity, with a clear focus on what she wants TLY to be.

I’m not the ‘most Nepalese place in the entire world’. I am who I am and this is what my Nepalese restaurant looks like.”

Right on cue, we hear a lovely bit of JimmyEatWorld as Niti’s complex but all-too-familiar story of straddling two cultures comes together in the eclectic and magical Little Yeti.

The future sounds exciting as Niti’s thinking about expanding and experimenting with new momo fillings and glazes, and I am here. For. it. Can you think of anything better than eating dumplings all day and watching the world go by? No, me neither.