"Like being strapped into a time machine and propelled light years into the future..." 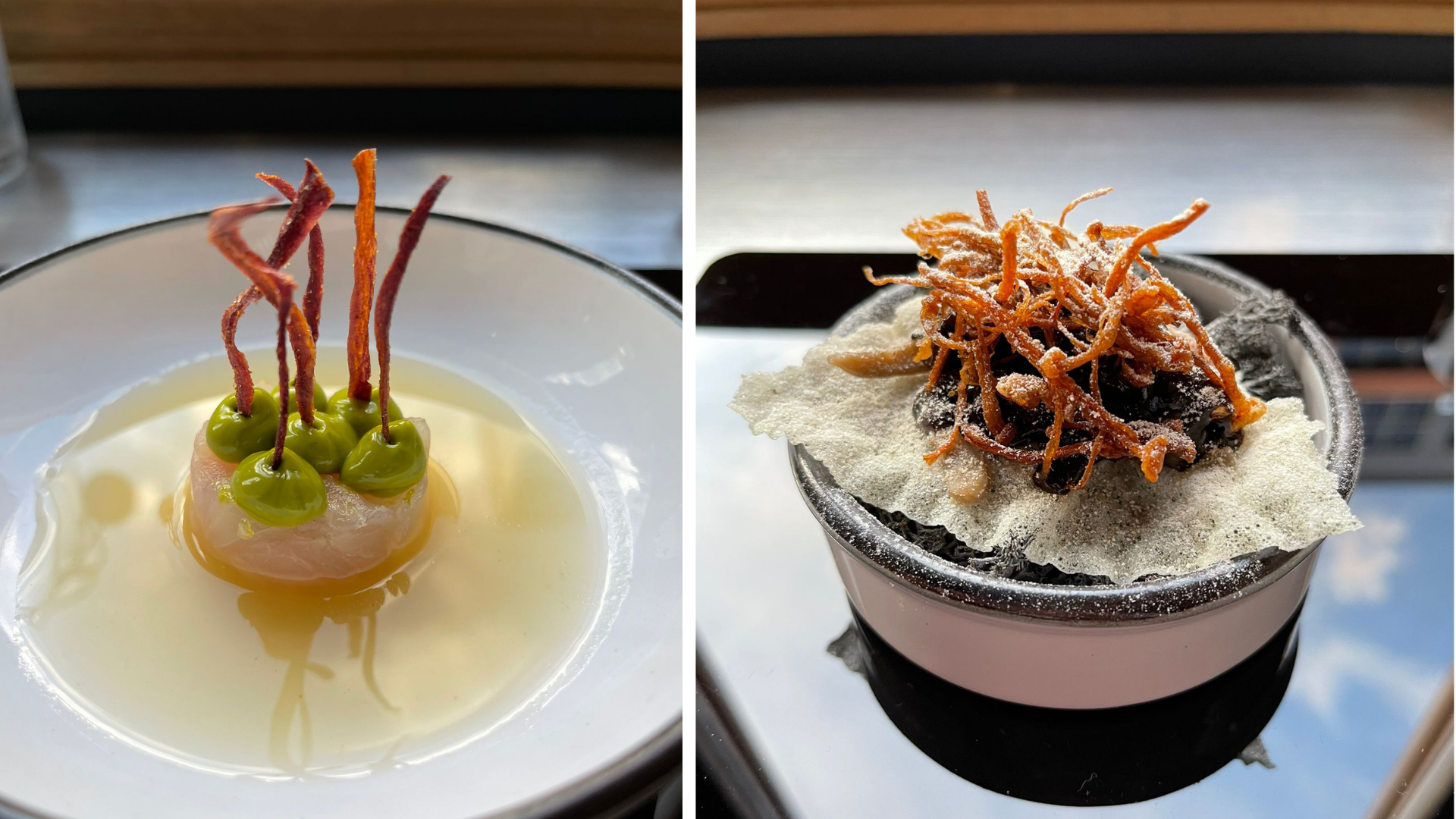 Much like Rutger Hauer’s Replicant Ray, I have done questionable things; Devouring leftover trays of stone cold Leo’s Fish Bar and Tasty Bites in my boxers at half nine in the morning, reeking of lager, coffee patron and cigs. I’ve downed styrofoam cups of curry sauce like the back end of a pint when I’ve run out of chips to dip into them. I even once voluntarily drunk the Guinness at Walkabout.

But also like Roy Batty, I have done extraordinary things. Namely, immersing myself in the Full Experience at District. And I did indeed revel in my time there.

For thirteen bewildering courses, the District chefs, headed up by Ben Humphreys (one of the wizards behind District’s similarly sublime sister restaurant Tokyo Ramen) , strap us into a time machine and propel our senses light years into the future, scattered among the neon clad streets of a post-apocalyptic Bangkok. All from within the confines of an unassuming unit on Oldham Street.

To any passing pedestrian, District, with it’s cobalt blue exterior and simple yet stylish typewritten red signage could just be another neighbourhood cocktail bar. It is unlikely that anyone is walking past and surmising “Hmmm, this gaff looks like it knocks out experimentally progressive Thai cuisine across a dozen multi-sensory courses”. Sandwiched between the graffiti clad shutters of a discount musical instrument suppliers and a now empty former hairdressing academy, District is a hiding-in-plain-sight culinary utopia.

Seated in the window, I’ll admit to originally being a little gutted that our backs were to the main event – the minimalist stainless steel and square white tiled restaurant, illuminated by beams of neon violet, plays host not only to the diners, but the squadron of anarchists in the kitchen, taking our pre-conceived assumptions and ideologies of what Thai cooking can be, throwing them onto their charcoal BBQ and evolving them into a series of plates seemingly cultivated during the throes of an LSD soaked listen to the Drive soundtrack.

However, we quickly come to our senses in realising that we are also located in one of the best people watching pair of seats in the whole of Manchester. The changing shades of the Mancunian sky above us a suitably kaleidoscopic backdrop for the three hours we spend immersing ourselves in the technicolor genius of Humphreys and co’s sublime, southeast Asian inspired sorcery.

The opening course is awaited with a small glass of Solara Ville Timisului, an orange wine from Romania, which may just be one of the most delicately cultured exports from the Carpathian region since Gheorghe Hagi’s left foot.

Our pallets livened, we are presented with our opener and thus, the first of many uttering of “FUCKING HELL”. The raw wild bass appears and, to be honest, it could have quite easily been beamed down to us and we wouldn’t have batted an eyelid, such was the extra-terrestrial appearance of it.

Crowned with delicately fashioned stems of Thai seven spice seasoned purple yam crisps and dots of Thai basil emulsion, the Cornish line caught bass almost slides apart at only a side glance of an oncoming knife and fork. Yet somehow, the fish is not the showstopper here, but rather the nam jim dipping sauce it is perched in the middle of. A furious blend of lime, fish sauce, palm sugar and fresh spices, it haymakers your tastebuds with sweet and heat, puckering your cheeks inwards and blowing them back out again with an explosion of flavour. FUCKING HELL.

Where do you even go from there? Tacos, obviously. Or, not tacos, as the menu clearly states. A duo of District’s take on the beloved Mexican street food is comprised of one purple corn tostada topped with expertly grilled Hereford ribeye, nam tok dressing, smoked aromatic mayonnaise and toasted rice, which is presented as a tag team alongside a wondrous fried roti bread sitting underneath an even more wondrous mound of short rib southern curry that has been braising like a bastard all day with fresh turmeric chilli and beef marrow stock. You could multiply this portion by 100 and no self respecting person on this planet could possibly get bored of gleefully inhaling it. FUCK…ING…HELL.

Now the law of averages and Hollywood tradition dictate that if the debut is a seminal piece of work and the sequel somehow equals or even surpasses it, then anything that comes afterwards will be about as appealing as watching Boris Johnson eating trifle with his bare hands. In the bath. Yet clearly, the team at District care not for traditions as with each passing course they manage to somehow bend our minds that little bit more.

The pork coppa and tamarind jaew is paired expertly with the kohlrabi salad, evoking memories of the earlier nam jim with it’s sharp, syrupy spice yet managing to veer into different dimensions with candied tomatoes and peanuts bringing more flavour than an early Craig David single.

Now, when you read ‘corn fed chicken’ on a menu, in all honesty, you hardly spin out of your seat and fist pump the air with all the ferocity of a ‘roided up member of the Jersey Shore cast when a Tiesto song drops. But here’s me telling you that’s exactly how you’ll react when the first morsel of District’s Goosnargh chicken thigh, immaculately brined, confited and finished off over the wood, passes your lips. The lucky bird is nestled among a Tom Kha coconut broth and accompanied by coal fired shimeji mushrooms and baby corn. The noises I made were like that of a cartoon Frenchman – all robust, excitable and a bit saucy. Which isn’t far from how you would describe this course. A full bowl of this would be the only thing you’d ever want to eat during the oncoming Autumn months, warming your soul like the ending of a Tom Hanks movie.

But it’s not only the brined chicken thighs that are from Goosnargh on the menu, with the tiny Preston village also delivering the duck several courses later. Slow roasted in the oven then completed on the coals, just the meat alone would be worthy of 1,000 words, but then you get the charred Thai apple aubergines and phat phet – a dry Thai stir fried red curry – added into the equation and you seriously begin to contemplate how you’ve managed to survive this long without this dish in your life. As the light filters from solero orange to hot pink to priest’s socks blackness outside, our tastebuds similarly veer all over the place, unsure of how to react to what is being presented to them. It’s a cacophony of curiosity and experimentalism and it is ludicrously fucking enjoyable.

Out of all of this insanity, though, comes the course which most makes you feel as though you’re starring in your own dystopian sci-fi thriller. Octopus in red curry with smoconut and pickled onion. Just read that back. Fucking exhilarating, isn’t it? The presentation alone is brutally brilliant. A single tentacle, immersed in a red so dark it could have been emitted from a mythical, hybrid of a creature rather than the common octopus. It feels like the spoils of a war that will be fought in 200 years time. Snake Plissken or some other big, futuristic sod could easily have lopped off this tentacle in a Bangkok alley fight in 2221, brought it back to his gaff and had it for tea. Oh, and the ‘smoconut’ – smoked coconut – is fun to say and even more of a laugh to eat, lathered onto the terrifying tentacle in question.

Dessert it no less daring, either, as a palette cleansing ‘tamarind Tangfastic’ sets us up for a, currently off menu, meringue sorbet sat atop ruby grapefruit and tom yum syrup. In a stroke of utter ingenuity, the herbs and spices usually reserved for the tom yum broth have been whipped into the meringue itself, cheekily pricking at your inner cheeks with every mouthful, delicately interplaying with the softness of the sorbet and sharpness of the grapefruit. After a dozen courses, it’s an almost energising reprieve from the savoury and sets up the finale, ‘It Was Only A Dream’ very appropriately. A mango custard, not far from pastel de nata territory in texture, is adorned with caramelised coconut and rice praline, bringing the curtain down on a brain emulsifying three hours.

That this was all washed down with several glasses of top class Pet Nat should come as no surprise. The relatively abrupt wine list may not be lengthy but it is perfectly to the point, while the cocktails, such as Surin Wine (rice pudding vodka ferment and toasted rice milk. Think top shelf vodka with cereal milk and you’re on the right track. Next level tackle) and Dream Gun (grilled banana bourbon with a dash of milk of the poppy and turmeric. Absolutely bananas) are similarly as apeshit as the rest of the menu.

Understandably, this is not a meal that lends itself to regular repeat visits. But District are now bridging that gap by offering a new lunch service every Friday and Saturday, between 12 and 1.30pm.

From now until the end of the month, the ‘My First Crush’ menu, which is half of the Full Experience, will serve as the lunch offering and then from November onwards a new ‘Endless Summer’ menu will take over.

So if you’re in the market for a lunch that can transport you across the globe and about two centuries into the future within the space of 90 minutes, you know where to go.

In the meantime, get onto District’s official Spotify playlist and fix yourself a couple of Robot’s Bloods.