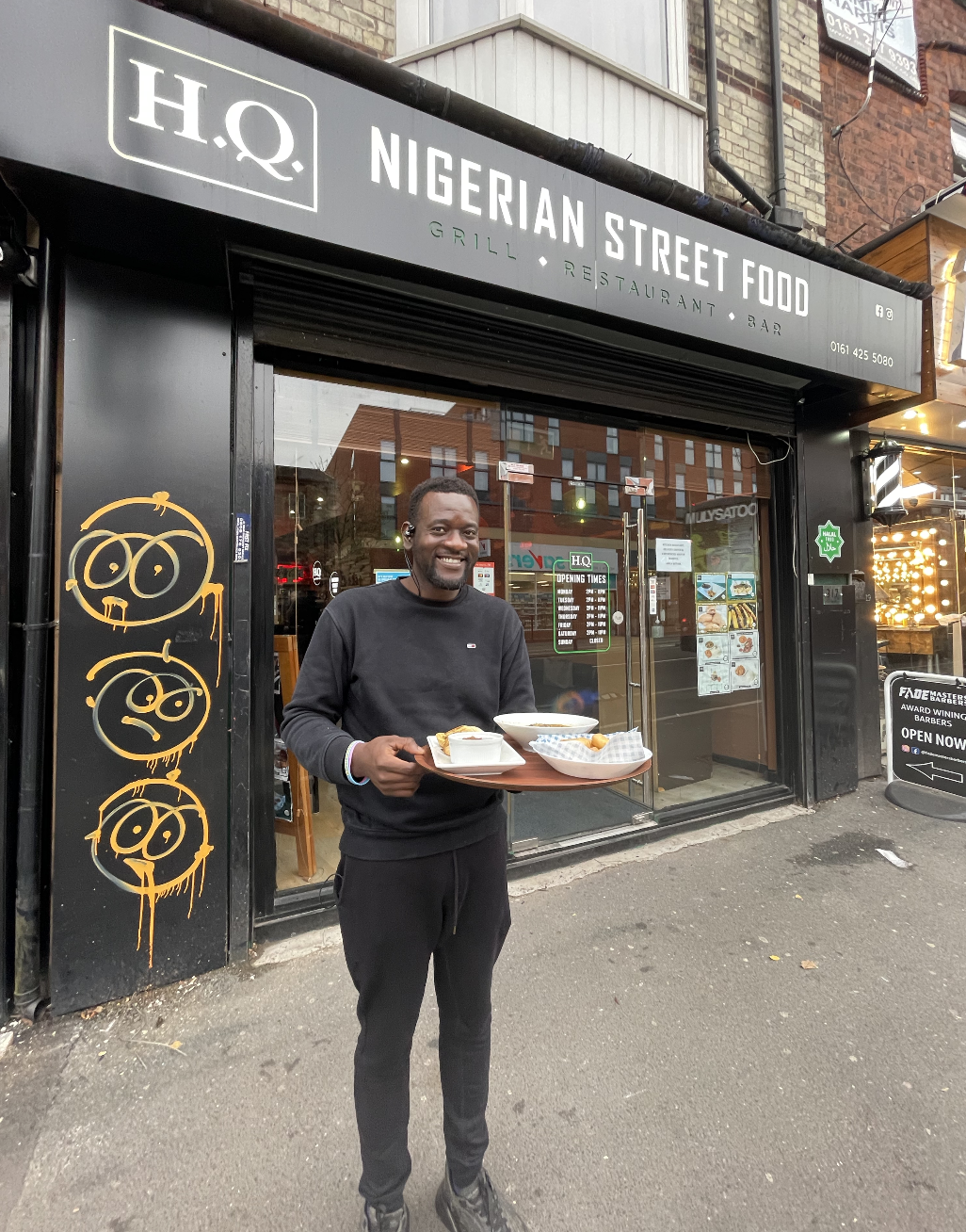 This is part of a series by Heidi Elkholy called ‘At The Table’ for EATMCR that highlights Manchester’s rich and diverse neighbourhoods, celebrating food, culture and community.

With roots in Benin, Henry has been manning family-owned HQ in Fallowfield for the last three years, and he has a lot to say about the under-representation about one of the most flavourful, most musical cuisines. I’m prone to hyperbole, sure, but that suya spice mix makes my tongue sing. If you haven’t tried Nigerian food, you’re probably in the majority, as there are only a handful of outlets in Manchester, but HQ – and Henry’s infectious enthusiasm – is the perfect place to begin your education.

‘We’re at a point where Nigerian food – African food in general, is just getting discovered.’

As we sit to eat the most intensely-fragrant, delicious spread, including suya (grilled beef or lamb – or both, please!) super-silky pounded yam and Egusi soup (not a soup that you  might recognise, this has a hearty texture and gets its name from the dried and ground  melon and gourd seeds that are used in many West African dishes). An enemy of bland food, every bite packs a punch – even the more unassuming dishes like boli (easy-peasy  roasted plantain) come with a sauce that’s so fire you could drink it by the jugful. For those wary of spice, I should stress that while the food is definitely spicy, there are so many other elements that dance in this flavour profile than a flat, one-tone scorching heat. The chilli kicks you in the face, but you’re then rewarded with moreish savoury tastes and a building sweetness that rounds this unreal experience off.

So if the food is so ridiculously good – this is fact, I’m afraid – why haven’t we seen more of it?

‘I don’t know why it shouldn’t be in the mainstream – so who’s not looking there? Because other cuisines like asian food, they all have a market… maybe because you eat with your eyes, and that’s where we’re unlucky’

And there it is: the fear of the ‘unknown’. An unfamiliar-looking dish with interesting textures and a foreign name will put some people off before they try it. Sad but so true, though Henry has the solution for this:

‘I think [people have] not been educated about the ‘other’ side of food. It’s like, before you get anyone to try something, you would bring them to a point where they’re comfortable. It’s a lot of work.’

He’s not wrong, but Henry is confident that Nigerian food will win you over when you try it  (Amen!) It’s at this point that he brings out an ‘easier’ (

) dish of chicken and beef spring  rolls. So far, so beige, but that symphony of seasoning in the meat hits like no spring roll I’ve ever tried before. You ain’t ready for the pure joy in that uber-flaky crispy filo pastry.

The idea of ‘eating with your eyes’ plays so much into Eurocentric standards of what is considered ‘normal’, ‘palatable’ and familiar. Any child of immigrants in the UK will tell you that Primary school lunch times could be a minefield to navigate, with children expressing  disgust at ‘foreign’ looking and smelling food. This is a very simplified comparison to describe the alienation of certain cuisines, and in time with education and increased representation, this can change. That said, the rise of the ‘ugly-delicious’ and David Chang’s Netflix show is also a great thing for world foods.

‘We need to get [Nigerian food] out there because if you lined up a Nigerian Jollof Rice (Ghanaians, stand by) with a burger, it would beat a burger every. single. time.’ The only thing that Henry says gives the burger an edge is the visual, ‘If you use the right picture, you’d be getting both the visual and the taste. Because any burger that you have out there by comparison is TASTELESS.’ Cue irreverent cackling.

We go down to the kitchen and sample some of the spice mixes. Most of the dishes on HQ’s menu, while usually containing meat, can be adapted to cater for vegetarians and  vegans when informed in advance. This is because most dishes are a long-ass labour of  love; slow-cooked tender meat adds both protein and a rich depth to the sauces, like the  simmering tomato stew with the softest beef that might bring a tear to your eye. Nigerian  food is first and foremost a source of sustenance, eaten to ensure you’re able to graft, but  none of that sad ‘food is fuel’ BS, our tastebuds deserve better:

‘The sweetest thing about it is that Nigerians type of cooking has nothing to do with a specific food, it works with every single raw material, that has to do with food out there, just making it different – spicing it up giving it that Nigerian feel.’

With all this said, Henry’s already looking to what the future holds for Nigerian cuisine:  ‘Let’s take the burger again … once we’re done with all our traditional dishes, we’ll start to do fusion. We’ll take a burger or a Chinese dish, and make it Nigerian. So there’s a  serious market that’s trying to get started and it’s in its engine stages. Now I just got to put the mirrors on.’

He completely loses me at this point because I’ve fallen down a rabbit hole imagining just how insanely delicious that crossover would be.

Head down to HQ on weekdays for lunch or dinner and visit the website for a visual of what to expect when you order. It’ll blow your mind.