From Tel Aviv to Tib Street: The Chef Bringing Israeli Pittas to Manchester 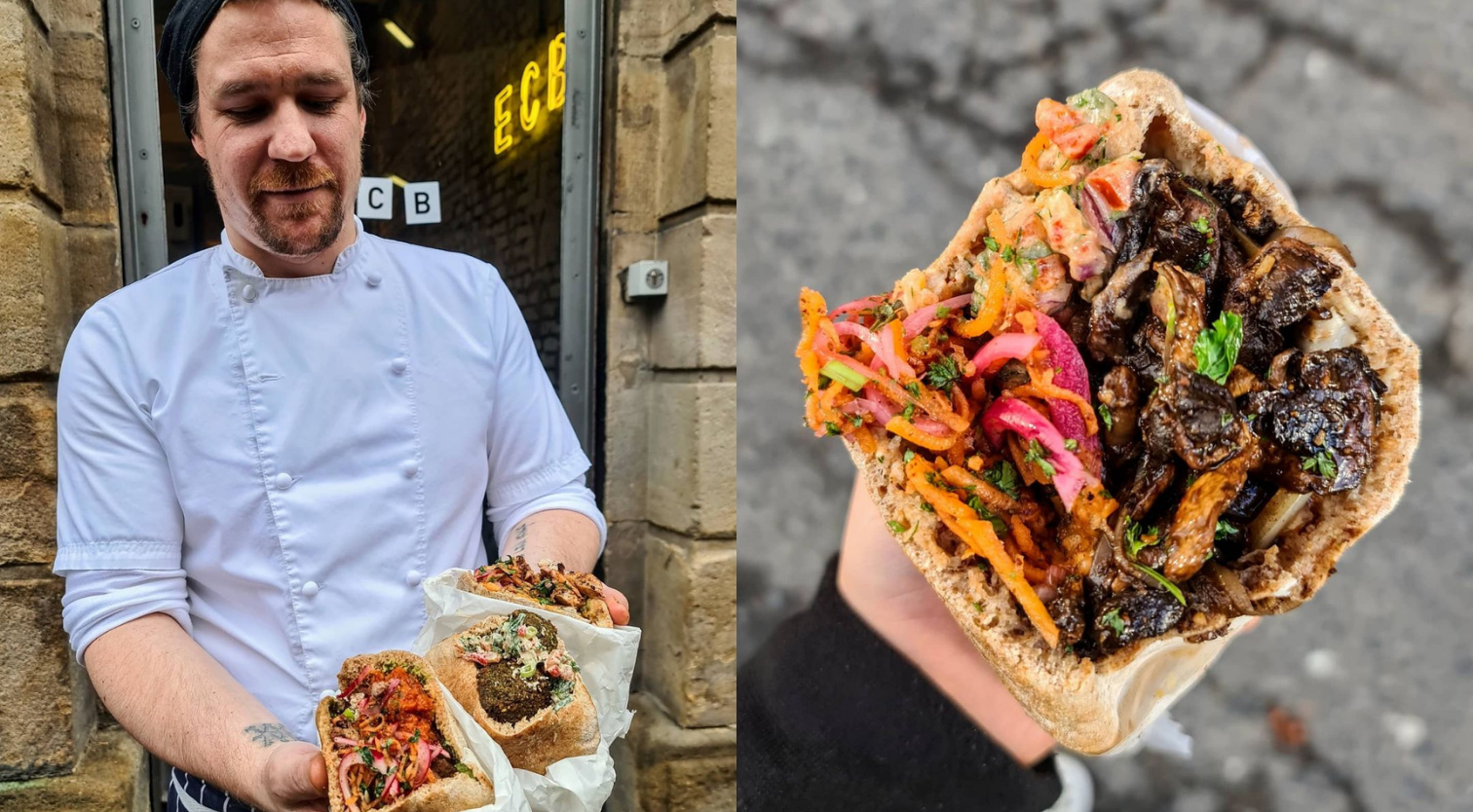 Introduced as being ‘born out of boredom with an urge to feed you. Stuffed pittas with a focus on flavour as always’, The Pitta Shop was Philip Cardy’s brainchild, spawned from his time in Israel and his memories of the shawarma stands he would so often frequent.

“Me and Sax (Evelyn’s owner Sax Arshad) were talking about a few things to do during lockdown and we’ve all been so bored, all of us, so we needed to do something. We had this idea in the background and thought ‘let’s just do it’. It took us about a month and a bit to get it all together to make sure it was all right” explains Phil, rolling out his latest addition to the Pitta Shop menu – a white chocolate and Biscoff babka that will serve as the menu’s sweet option to supplement the mountains of mouthwatering grilled meat and flatbread.

As chickpeas are blended behind us, ahead of being turned into some of the city’s finest falafel, Phil delivers one final, satisfying fold to his newest creation before trays of inka grilled, Persian spiced lamb and Middle Eastern inspired chicken are ferried to and from prep benches, with service set to start in a little under an hour’s time. With opening hours currently limited to just Fridays, Saturdays and Sundays, there’s barely a moment to rest with demand proving to be astronomical since The Pitta Shop flung open it’s delivery doors last month. 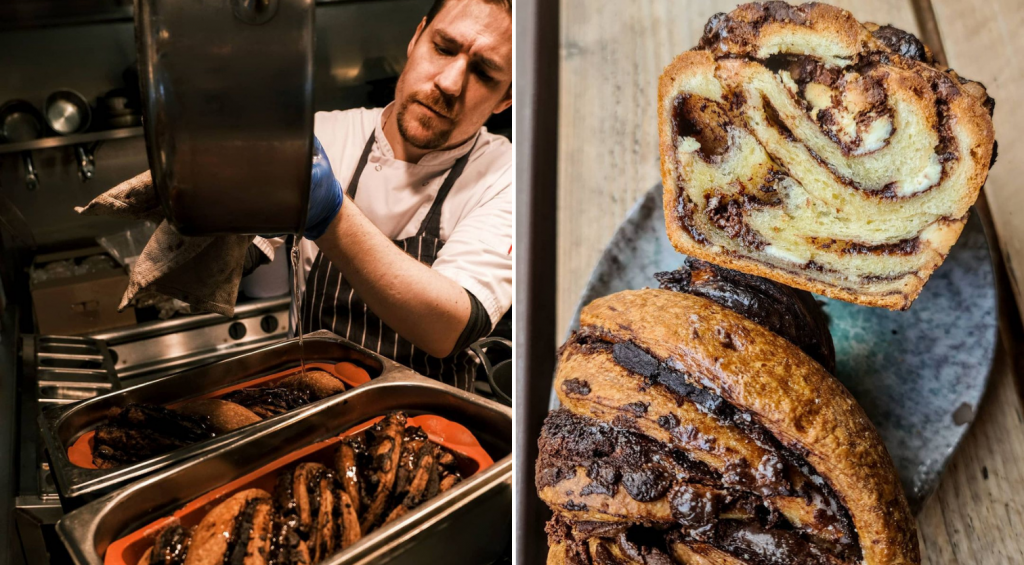 While a transition towards Middle Eastern street food has certainly streamlined operations for the time being, the level of care and attention to detail dedicated to preparation and flavour is arguably more impassioned than ever, as Phil seeks to replicate his culinary experiences in Israel for the Mancunian masses.

“We’ve had pittas on the menu before. We had a Lebanese mushroom flatbread that we made in house and a Turkish kebab as well as a few other bits, so it’s continuing similar things that we’ve done before” chronicles Phil, who’s background has helped curate several menu choices over the years (can still taste the hangover curing heat of his Shakshuka. An absolute life saver on so many Saturday lunch times). As he continues, you get the sense this latest project is a real labour of love.

“We come in the day before to get all the meat done because deliveries are a bit restricted due to lockdown. We get the meat and veg prepped, letting it marinade for 24 hours. The chicken’s got some yoghurt in to tenderise it and the lamb’s got some vinegar and lemon juice to break it down a bit easier, on top of loads of different flavours and spices. We have Persian spice for the lamb and a Middle Eastern shawarma spice in the chicken.

“Because we don’t have the proper shawarma stand gear here, we’re using the Inka grill and then tenderising it in the oven and thinly slicing it.

“When we get an order, we’re mixing it with what we’re calling a gentleman’s relish, which has plenty of umami flavour. It just adds that moisture that you’ve lost from cooking it previously. For the falafel, I’ve always wondered why people in England use tinned chickpeas for falafel. You should be using raw chickpeas, soaking them and then blending them down.”

And it’s not just what to do with the ingredients once they hit his kitchen counters that dominates Phil’s thoughts, but also where to source everything from in the first place. Namely, where could he find the perfect pitta?

“I just compare it to what I used to have in Israel, to be honest. The first place I went was Prestwich, I just started talking to people who live there to see where they get their pittas from. The pittas you get from supermarkets and a lot of suppliers in England are dog shit. We use a guy called Pittanoor, which is the guy everyone told me to use. He brought us a couple of samples in and as soon as I opened the packet, I knew they’d be great. We had the option of spelt flour, wholemeal or plain ones and, because the background of Evelyn’s is healthy eating, we chose the wholemeal ones.”

The more you talk to Phil, the more you understand just how important his background and Israeli upbringing are to the way he runs his kitchen and develops his menus. An intense work ethic was instilled from his formative years, working in hotel kitchens in Israel when most youngsters in England are beginning their first paper rounds.

“I was born in England, but around the age of 11 I emigrated to Israel with my father. I grew up there and had a lot of my childhood there, so I’m a bit of a mixture. My mentality’s more Israeli but I sound like a scumbag Essex boy!

“I worked in lots of different kitchens in Israel. Hotels mainly, from a very young age. I’ve been working since I was 13. I was working more than I was in school, I didn’t go to school very much. I was renting out a flat with another mate of mine when I was 15, 16.

But hotel kitchens were not the only source of education and discipline for Phil, who also served in the Israeli military after being conscripted for National Service. It was an experience he credits with moulding him into the chef he would go onto become upon returning to England.

“I did national service for just under a year, because I decided to come back to England. I really enjoyed it, I think it’s what helped build me up to understand the structure of kitchens. I was always a bit of a shit when I was younger so as soon as I got into the army I understood it was a military operation and you had to listen to your superior officers. That’s how a kitchen is built. Kitchens are built around what is essentially an army regiment and in Israel the army gives you so many opportunities and it taught me so much that I’ve brought into the kitchen. I wanted to be a chef in the army and I ended up being a tank mechanic!”

Upon returning to England, Phil bounced around a few kitchens in Essex and London, even spending time under the tutelage of Gordon Ramsay, with whom he had a very interesting introduction.

“I didn’t work with him too much one-on-one. But he was pretty down to earth. If he saw something wrong, he’d tell you. The first time I met him, actually, he walked into the walk-in fridge and I was just eating some cream cheese out of the tub with a bagel and I didn’t know what to do. He just looked at me, laughed and walked out.

“I never got the full treatment from him, but the only time I did get sort of told off by him was when I picked up the phone mid-service, the phone was next to my section. I was like ‘hello?’ And it was so busy I couldn’t really hear anything. He’s there going ‘it’s Gordon, can I have Simon, please?’ Who was my exec chef. I was like ‘who? Hang on a second, mate’ and he hates that word ‘mate’. So I gave the phone to my exec chef Simon and said ‘Some guy’s on the phone for you’ and then he got bollocked down the phone ‘who’s this fucking idiot answering the phone?'”

The tastes of Tel Aviv have remained with Phil after leaving Israel, evidenced by many of his contributions to the Evelyn’s menu and, of course, his newfound Pitta Shop. It’s a passion that proves the latest venture is no mere flash in the pan.

“As soon as I get to the train station in Tel Aviv, I don’t know if it’s still there but when I get there I know straight where to go, there’s this one guy selling all different types of shawarma, different types of meat. He has chicken, lamb, beef, veal. I normally go for a lamb cos I love the fat and I have that served on a laffa bread, which is like a naan but a bit flatter.

“I think what will probably happen is we’ll look at opening up another site, but you never know how things will turn out. It depends what sites are available for us to use, really. If we go with the big proper skewers then we can explore different options but I think we’ll keep it pretty simple.

And what of other introductions to the menu? Is there any other staples of Israeli menus that we should be expecting to see pop up any time in the near future?

“Israeli food is so vast because it’s influenced by so many different countries and cultures. I could mention a certain food and someone would say ‘ah that’s not Israeli it’s from here or there or whatever.’ I’ve always wanted to bring in my mum’s good old chicken noodle soup with the matzoh ball. I love doing that at home, I cook it more than anything at home. I always change it, throwing extra bits in there like lemongrass or whatever. In Israel you go to any house and every single mum and grandmother does it differently, so I’m always looking at what they’re doing, but there’s nothing in particular I’d bring back. It’s just whatever seems to work, really.”

Oh, and by the time you read this, a lamb Merguez sausage and whipped feta option will have found it’s way into the regular rotation alongside a mushroom and onion pitta. Yes, we intend to throw several of them into our faces for as long as they’re available.