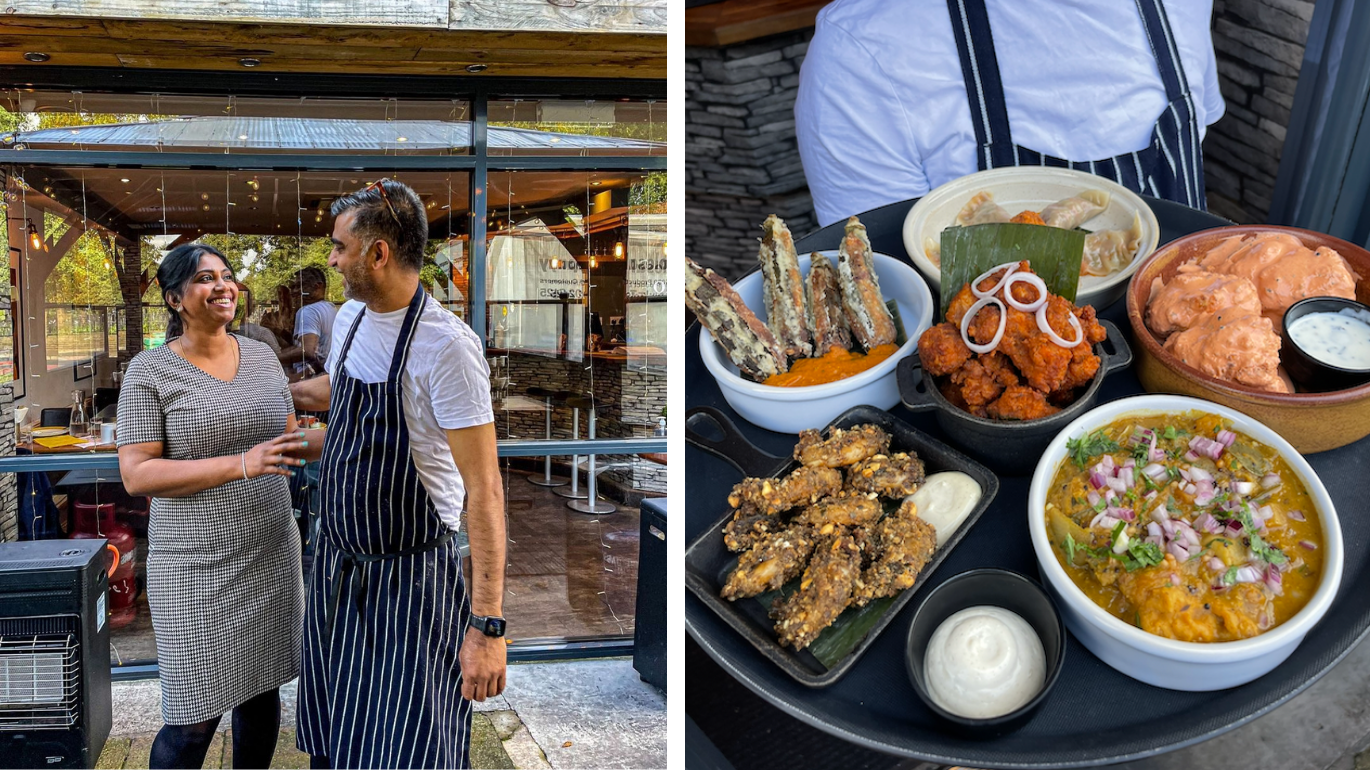 This is part of a series by Heidi Elkholy (@saltfatacidheidi) called At The Table that highlights Manchester’s rich and diverse neighbourhoods, celebrating food, culture and community. Previous feature: HQ Nigerian

Being around owners Ganga and Saju is like coming home during your uni Christmas  break: there’s warmth, knowing comments that push all the required buttons for the  inevitable bursts of laughter, and mock-outrage. It’s something special, and it’s exactly what you can expect when you visit them at Amma’s Canteen.

‘When it comes to our dishes, we choose what we enjoyed growing up’.

Amma means ‘mother’, and so it’s not a great leap that the super-popular Alleppey fish curry is based on Ganga’s mum’s recipe. Wild to think we’re not just eating a curry, we’re eating a dish passed down through generations, where the nuances of flavour and trial and-error seasoning means everything is exactly how it should be. Saju’s family’s side  also features on the menu, with recipes from his mother and aunts. It’s like being invited  to the table at a family reunion and stuffing your face with delicious, nurturing love. The  recipes from Kerala, Chennai and Madras come straight via the family WhatsApp group.

As well as the menu being an homage to the women in Saju and Ganga’s lives, the  restaurant floor is very much a family affair. Their daughter would work front-of-house  before going to university, and the small team of floor staff have to go through every item  on the menu for their staff lunches (the actual dream) so they are super-well-informed  when dealing with customers.

Amma’s mission is to dig the UK out of the very out-dated expectation of the ‘Curry  House’, where every region in the world’s seventh largest country is picked apart and then  mashed together in a homogenised bastardisation of Chicken Tikka Masala.

‘Our restaurant is not in the format of an Indian restaurant – we don’t sell popadoms, and  English people can walk in and find they don’t recognise any of the dishes’.

But they’re not in a hurry to add Jalfrezis or Baltis to the menu, and don’t get Saju started  on naan bread: ‘My mother first tried naan bread when she was 45! In South India, we  don’t have wheat farming so you won’t get naan here.’

Saju’s is a long and fancy relationship with food, having worked as a chef for 30 years in  the swankiest hotels like the Taj group where the pressure was on to impress the  celebrities and royalty that would visit. Unlike a typical Indian curry house with grandiose  vibes, you won’t find any imagery of fancy India at Amma’s Canteen. The interior is warm  and inviting but is decorated purposefully without rank, without pretence. Of the awards  that this place has won, the only one Saju will display is the Vegan Offering of the Year  award from Manchester Food and Drink Festival in 2019, ‘Vegan food should not be an  afterthought’. Saju argues that the Indian caste system and the food associated with the  highest caste has perpetuated the idea that India is the land of elephants and maharajas.  ‘India’s got 600 million poor people and they eat delicious food everyday… That’s the food we want to give’

Cue the ‘From the Street Cart’ section of the menu, where dreams come true. You’ll also  find a Curry, Biriyani and Dosa section of the menu, in lieu of the conventional (but not at  all Indian) starter-main-dessert set up. I’ve only ever made it past the street cart section  once, and that was only because I was sated by the fact that there were enough of us at the table to ensure we could order everything. Super-standouts are the delightfully hot  Chicken 65; the Porucha Vendaka – okra fingers stuffed with a mixture of nuts, raisins and  then fried to perfection with an amazing chilli hummus. And if we could all just take a  moment to appreciate the beauty that is Saju’s Cauliflower Bezule: spiced cauliflower  served with a tangy okra yoghurt dip that delivers a surprising amount of heat. Because  they care about your experience so much, Ganga tells me this particular gem is not on  the takeaway menu, but if you nag them enough they may oblige you. You’re welcome.

If you like dim sum, their Stuffed Kozhukattai, is a must-try. Home-made folded parcels of  glutinous joy filled with veggie-chilli goodness and served with a dollop of what’s called  ‘poor man’s dip’.

The biriyani is like the most delicious savoury trifle (stay with me) in that it’s layers and  layers of delightful tender lamb chunks, rice that is seasoned for the gods, and fried  onions on top, hitting all those brown-mum nostalgia points.

We end on the topic of India’s vast diversity. Some people describe countries that large as  a ‘melting pot’, but Saju says ‘a melting pot means assimilation but in India, every region  has its own perfectly-formed culture and they’re all mixed together, more like a tossed  salad.’ We then take a million photos of them and their waiter Harry, who is loved and  ribbed mercilessly in equal measure. It’s clear to see the team at Amma’s Canteen is treated like an extended family, and we love to see it.