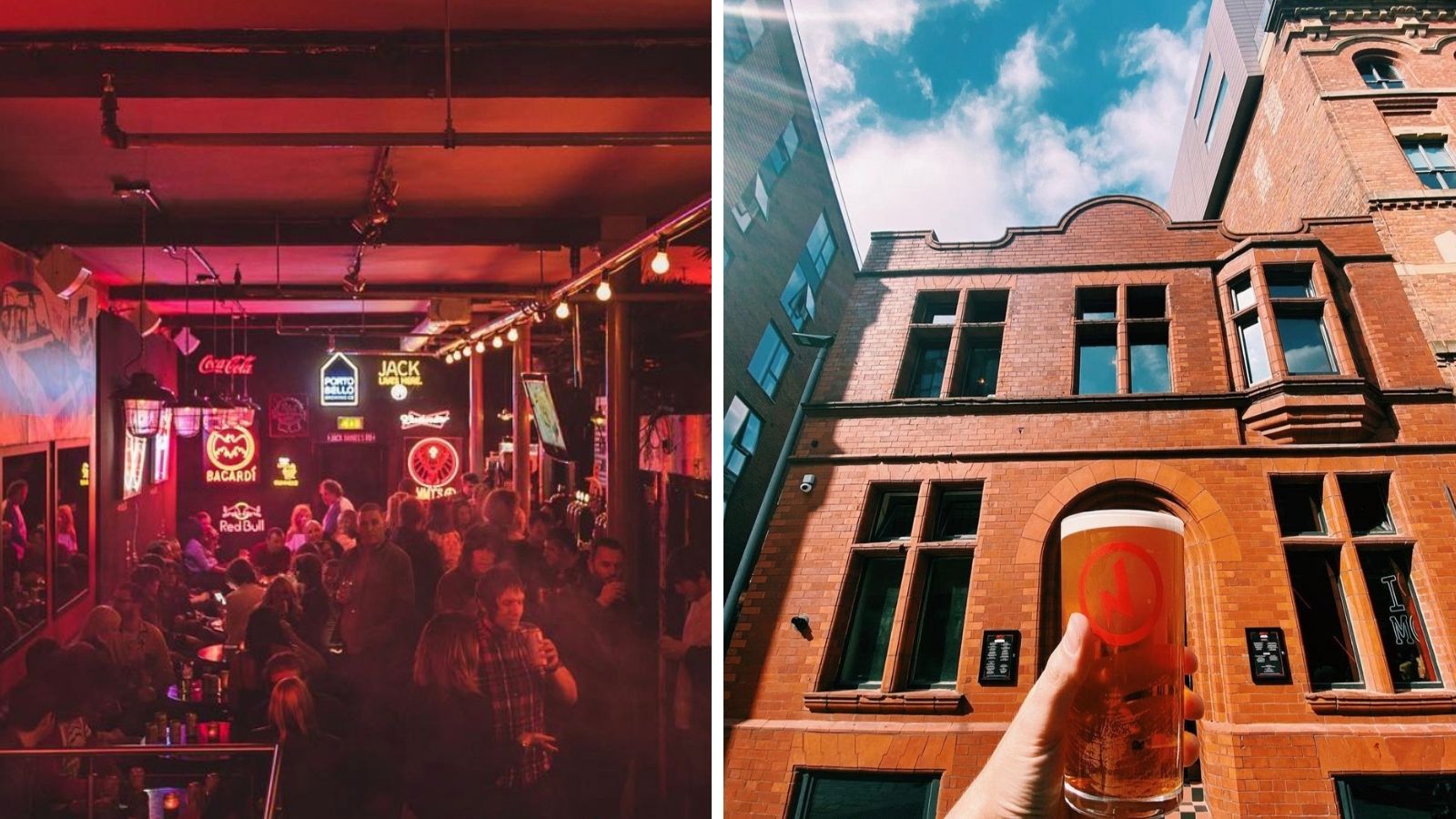 “The old Jimmy’s was held together with spit and sellotape. There’s no way we could have done what we’re doing now at the old Jimmy’s.” It’s hard to disagree with George Craig, as he reminisces over the previous six lager stained, sticky floored years between Newton Street and Ancoats. Taking in an early afternoon IPA as the sun threatens to crack through the front door of Jimmy’s Vol.II on Blossom Street, there is an unmistakable sophomoric vibe about the recent addition to Cutting Room Square. Thankfully, it’s more ‘Favourite Worst Nightmare’ than ‘Second Coming’.

Like any great second album, there is more than a hint of maturity entrenched in the new Jimmy’s, yet clearly enough mischief to maintain the excitement associated with their Northern Quarter debut. George himself, the frontman for brand and marketing as well as Jimmy’s food operations, is now 31, married and about to celebrate his daughter’s first birthday. It’s quite the paradigm shift from life circa 2016-19. As the gentle opening licks of the Stones’ ‘Wild Horses’ slumbers out of the speakers, George explains to me how food is now his focus, where once it was an unfathomable addition to the offerings on Newton Street.

“When we were in the Northern Quarter, we just weren’t set up to be a place that did food. We were somewhere you went to watch bands and get lairy. I don’t think anyone would have wanted to eat in that fucking basement.”

Jimmy’s past as a sweat soaked, subterranean den of debauchery doesn’t exactly inspire memories of craving hunks of smoked brisket or fresh lobster tails delicately dotted with parmesan butter. In fact, if memory serves correct, food was often expelled rather than digested at the neon clad Newton Street dive, which was grimly part of its charm.

Two years on from Jimmy’s undignified eviction from Newton Street (in favour of a *let’s out a prolonged, exhausted sigh,* fucking office development) the red bricked Blossom Street spot feels like a natural evolution, even if it may not have been envisaged in the initial masterplan for the Manchester branch (sites in Liverpool and York have also been minted in the intervening six years).

“I was devastated when we were booted out,” laments George over the late 2019 shunting, which was further exacerbated by, y’know, that massive fucking global pandemic that decided to drop at the beginning of 2020.

“There really wasn’t a plan if this place hadn’t come up. We’ve obviously had the dark kitchen doing Deliveroos during Covid, but a new Jimmy’s almost didn’t happen. And even after reopening, we had that dreadful fucking Christmas and January’s always quiet as well, but now it feels like we’re finally starting to get somewhere again.”

Fortunately, a Cutting Room Square vacancy popped up courtesy of Matt Bambroffe, who played five-a-side with George’s older brother, Jimmy (of Jimmy’s!) and was also a family friend of George’s wife, Megan. Neighbouring with Rudy’s, the Jane Eyre and Edinburgh Castle among others, it almost feels as though 2019’s eviction was a blessing in disguise, with the new digs firmly cemented within Manchester’s brightest, burgeoning neighbourhood. Although that’s not to say it hasn’t still presented plenty of its own problems over the last few months.

“We’ve not got the late license like we had at the old Jimmy’s, and we’ve not got the live music license, even though we have a basement space downstairs which is ideal for it. So that’s something that we want to change eventually. Also you get things like residents in some of the flats surrounding us complaining. We had one complaint about food smells coming out of the building when we weren’t even open, so there’s shit like that to deal with, but y’know, we’re really happy here and looking forward to properly kicking on with the food, which I’m really excited about.”

The food is George’s passion and is one that was established long before his family broke ground on Jimmy’s six years ago. As the lead singer of indie outfit One Night Only, George, along with brother and bandmate Jimmy (of Jimmy’s!) toured the world and, though the traditional assumption of a touring band’s diet is one that consists of nothing more than petrol station Ginsters, Red Stripe and Jack Daniels, the Craig lads were exposed to some of the globe’s greatest culinary experiences and, crucially, some of the world’s best barbecue in the American south, which served as a transformative experience for George.

“We were being taken out to all these mad places by Universal in every city we went to, but it was in the Deep South and in Texas where the barbecue really blew us away. We hit up all the famous spots, like Franklin barbecue in Austin and I’ve taken all that and tried to implement it in my own way here, but with our own sort of spin that makes it unique to Jimmy’s.

“I’d say it’s glam rock BBQ. That’s how I’d describe the Jimmy’s menu. We’ve got a dish called cock fingers on there and a hot dog called the King Dong, so it’s that sleazy sort of rock and roll vibe from the ’70s, which is the type of music I’m into combined with the food that I love. I just wanted to have fun with the menu, as you can with a lot of the names on there.”

The ‘Meatwood Mac’, ‘Springsteen Rolls’, ‘Brisket Case’ and ‘Plantera’ are just a few of the plates that are being slung from the Jimmy’s kitchen and form a menu that has been a real labour of love for George, who has gone from hosting the likes of Sam Fender, Bill Ryder-Jones, Kate Nash and Red Rum Club to obsessing over every minute detail of a barbecue offering that he can confidently compare to the joints he immersed himself in during the heady days on the road.

It is harking back to the early days of Jimmy’s that shift into focus just how vital a venue it felt like at the time. Springing into action in 2016, it suddenly became a go-to for the post-midnight crowd who intended on crashing into the weekend amid in as chaotic a fashion as possible. It was also a venue that helped break in acts like the aforementioned Fender. In a city already swamped with stages on which to perform, it could have become just another pretender, yet Jimmy’s thrived and intertwined itself into the fabric of the live music scene in Manchester. The experience the Craig brothers brought from their longstanding ties to the music industry, having both been signed to Universal since their early teens, was evident in their execution of everything within Jimmy’s four walls. There were no hang ups on tired Mancunian tropes, but instead a raw and ready atmosphere that they knew would resonate with the city’s gig goers.

Behind the scenes, the operation is a family affair, with George and Jimmy’s (of Jimmy’s!) mum, Louise and Dad, Richard, helping out with food development, site styling and company administration. Such a tight knit nature has undoubtedly help keep the Manchester branch afloat during the treacherous waters it encountered over the last two years.

“I think some people had this impression that we had a bottomless pit of cash, which was simply not true. It’s been a real struggle,” explains George, clearly relieved that the navigation of Jimmy’s is finally back on course, “We’ve had some absolute nightmares to deal with but I think being a family business has definitely made things that bit easier. Obviously it’s still really hard a lot of the time, but we’re all looking out for each other, it’s not like we’re dealing with a load of investors or anything like that where you’ve got people to answer to who could make life even more difficult for you. Any problems we have with Jimmy’s just get dealt with between us and we carry on.”

The new Jimmy’s still possesses a lot of the same attitude as the old Northern Quarter haunt. The neon signs still adorn the walls, the signature lightning bolt present on every glass. There’s the comforting blend of Americana dive bar and local warmth, like you’ll be greeted with your regular order upon arrival but also have someone taking the piss out of your trainers. Which is exactly what you should want from any establishment worth it’s salt, to be honest.

A surrounding Ancoats area may come across a tad more low key than Newton Street. Not as rough-and-ready, more marina than mucky piss up, but it may be the coming-of-age work that Jimmy’s needed in it’s discography to properly ingratiate itself into the pantheon of iconic music venues in Manchester. With a sound proofed basement just crying out for bands to grace it’s stage, the spirit of the old Jimmy’s could soon be allowed to flourish once again, only this time with something to soak up the suds.

Until then, it’s barbecue, brunch and blues and a return to whatever normalcy might end up being after a tumultuous two years. Like all rock-and-roll greats, Jimmy’s is evolving and, while we eagerly anticipate the ‘weird, experimental psychedelia’ phase of whatever their third incarnation may bring somewhere down the line, we should all be very excited for the Ancoats Anthology because, if the early days of their new barbecue menu is anything to go by, it’s set to churn out a series of bangers.