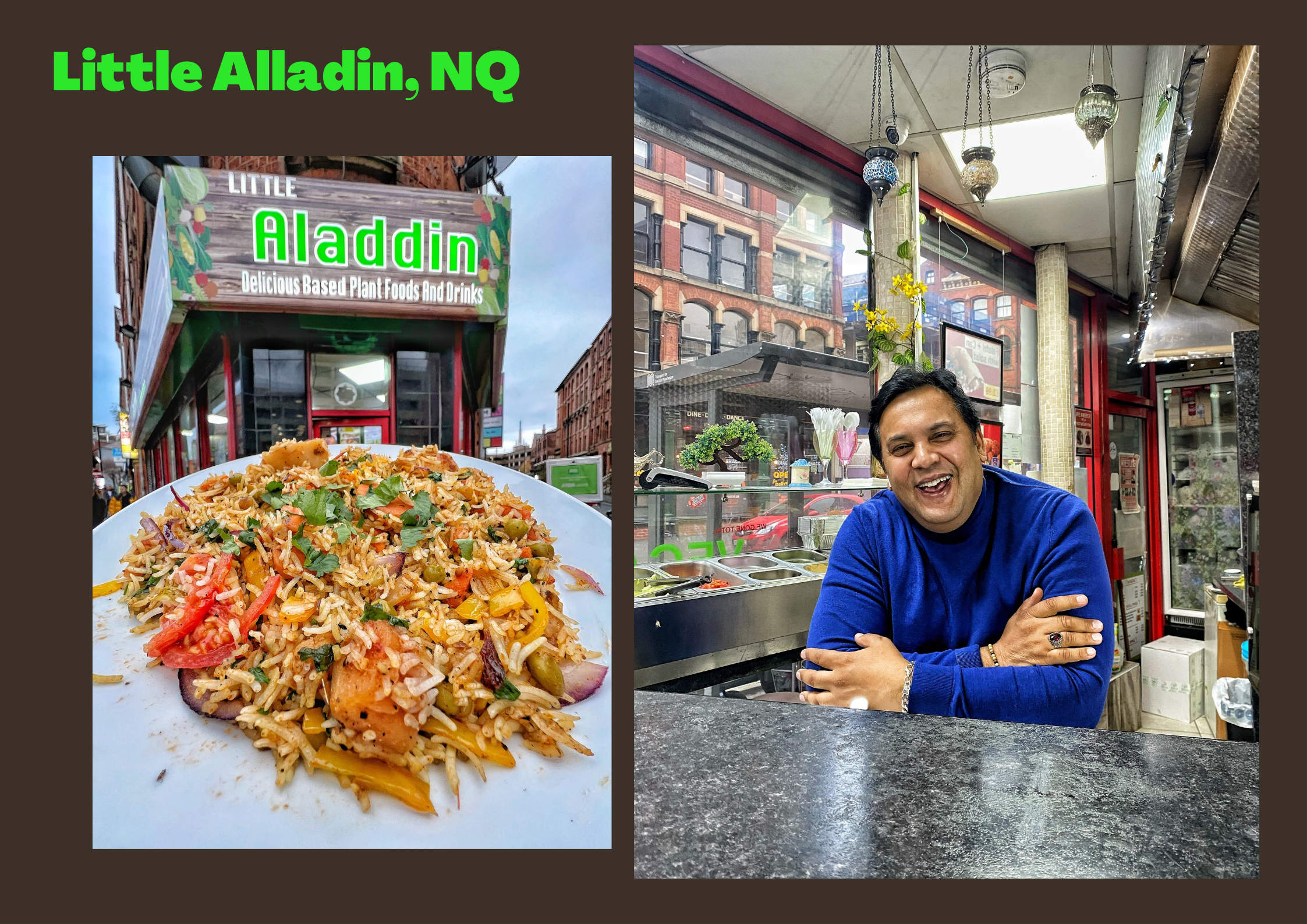 Nestled in the Northern Quarter, Ali has been running Little Aladdin since 1997, when the NQ was
a different place entirely.

“I took over the cafe when this area was mainly serving the Asian community working here in the warehouses and factories around NQ, and that’s how these menus came about — Hello there!”

This is pretty much the pace of this whole interview: from his tiny counter in his tiny corner cafe, Ali sings out snatches of his story (ask him about his Bollywood renditions) between greeting and serving customers during the busy lunchtime on which we cleverly decided to schedule this chat. His offering honours the cafe’s past lives, continuing to feed and sustain workers in town with massive portions for small prices.

The majority of his customers are regulars and vegan, but that’s about all they have in common. From students to construction workers, everyone is-without exception-so down for this food.

At the counter, you’re taken through the range of seven (seven!) vegan curries for your Rice+Three, which change daily and is their most popular order. On this particular Tuesday, you could choose from dishes including daal, spinach, cabbage, mixed veg, and cauliflower. Throughout service, I watch as food appears from what seems to be a hole in the floor – and when I can’t take the mystery any more, we’re led downstairs to the kitchen where world’s friendliest chef Mustafa shows us his prep and cooking area – there are chickpeas marinating everywhere, and it smells so good.

“The way we prepare the food is as if we’re cooking it for family at home. There’s nothing artificial, and the flavour is very unique. Because it’s vegan it will always be affordable”. [We digress at this point to talk about the resentment we feel towards establishments that do vegan food for super-expensive]

The food we had was fresh, honest and flavourful. It’s very much a no-frills affair, which is why a falafel and fried tofu wrap (ngl looks basic, tastes amazing – especially with their homemade selection of vegan sauces: chilli, garlic, mayo and mango) won’t even set you back a full fiver. The Biryani though, was notable in that where a traditional Biryani would be layered and cooked with bone-in meat, its absence changes the dish entirely. Expect generous chunks of butternut squash and other nutritious veg in there – you won’t miss the meat, I promise.

Ali’s journey with veganism started with a health concern:
“I was always a big lad, still am. I started cutting down on red meat to lose weight, then stopped eating meat completely. I realised you don’t have to add any animal products to enjoy good food. Then I got really really ‘holy’ on that – started working on myself and also learning from the many different vegan communities in Manchester and their views
— Hi guys, how are you?”

Ali’s is a story of travel, hard work and determination. Like many in the 80s, he emigrated to the UK from Pakistan in 1986, “I came alone and didn’t know anyone. I would say I’m a self-made man; I’ve seen a lot of ups and downs but I worked hard, I feel like my cafe is a community spot serving the many friends I’ve made.”

With a story so familiar and reminiscent of the many people from all over the world, coming to the UK full of hope and carving out an honest existence, it is truly what makes Manchester such a beautifully diverse city. When asked for his parting words of advice for those trying to make it on their own, Ali is a champion of grit and self-motivation:

“Nothing is unachievable – and don’t give up early. Though Covid did affect us big time with offices not being fully open, but people are starting to come back in. Never give up. The most important thing I would like to say is that nothing is going to help or be enjoyable if you don’t have proper good health, and that’s starts with food, the environment, and animal welfare.”

Ali dreams of expanding his tiny cafe, able to then offer even more of his super-popular
vegan food. With his growing die-hard following he has shown that this, like his dreams
before, can be achieved.