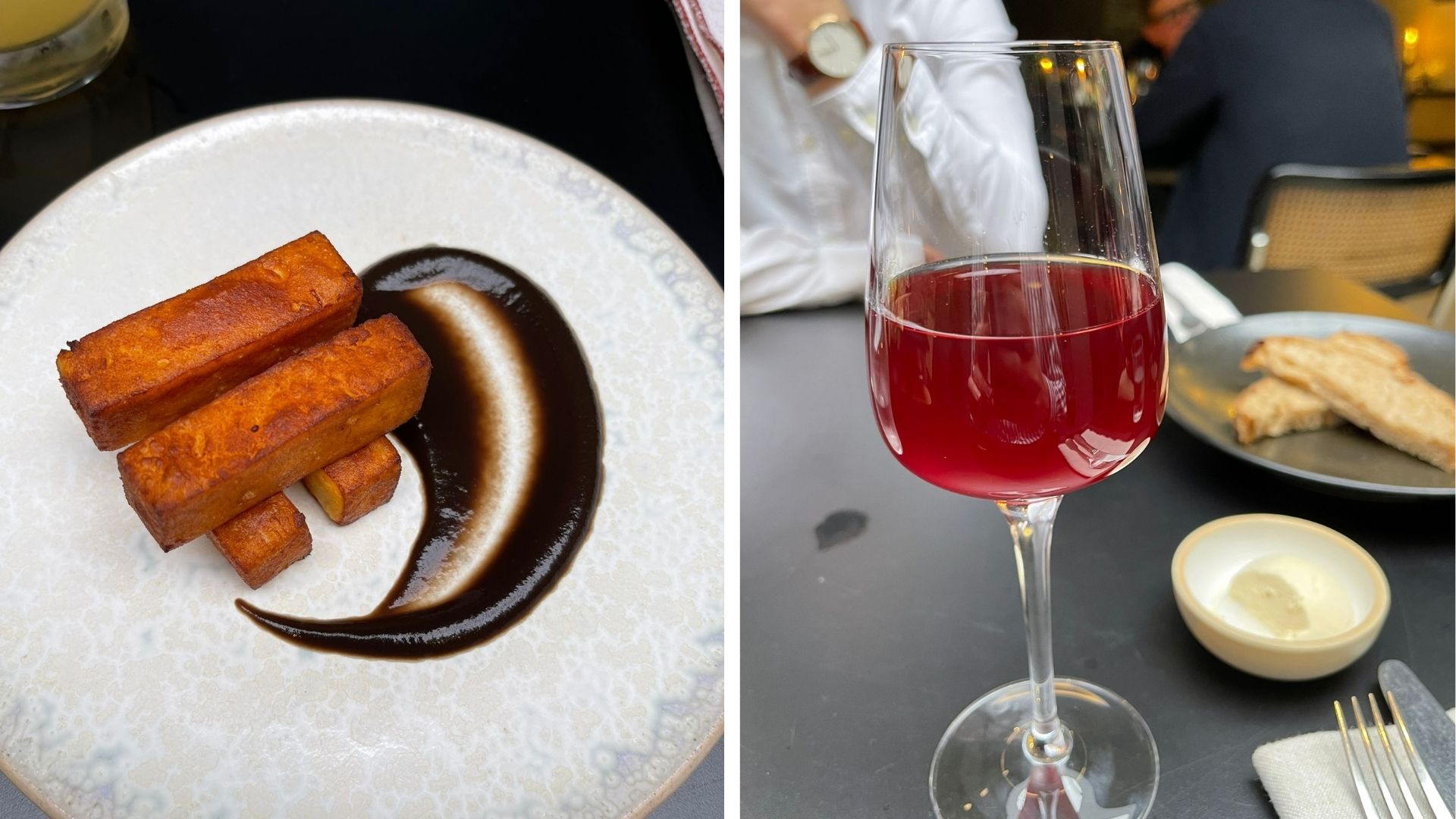 “There’s something wonderful about drinking in the afternoon”

It is easy to be dismayed by the Autumn approach. The drizzle, the puddles, the days drawing to a close before the evening’s barely had time to settle. Nipping the shop in your swim shorts and sliders is shelved for another six months at least and the barbie is shunted to the back of the garage next to that fucking exercise bike you swear you’re going to start using again. Historically, however, if the beginning of October has taught us anything over the years, it’s that we are set to enter our peak drinking months, and that should be cause for an immense amount of excitement.

And one of the places you absolutely need to be imbibing during A/W 21/22 (and beyond, for that matter, but let’s stick to the season at hand for now) is The Creameries in Chorlton.

Approaching the former retail bakery on Wilbraham Road, the Saturday afternoon clouds hang low, a hue of grey reminiscent of a pocket load of old 10ps, yet the clingy, moist air can do nothing to dampen spirits as I trade it for the glowingly warm embrace of The Creameries’ lunch service in full swing.

The calm that greets you upon stepping through the door is unerringly zen. As if someone’s just dropped your favourite big jumper onto you after a deep bath (cc: @AccidentalPartridge). But instead of wanting to collapse onto a settee with a brew and a binge watch of Seinfeld, you hear the Gil-Scott Heron pouring through the speakers and immediately want to tuck into the back corner of the immaculately lit and greenery adorned dining area and, in short, get a bit fucking trousered (responsibly, of course).

Owner and head chef Mary-Ellen McTague is a force of nature both in the kitchen and out of it, serving up some of the finest, most inventive seasonal menus in the city while also heroically heading up the charity Eat Well MCR, which has provided chef made meals from Manchester’s finest restaurants and bars to tens of thousands of people sidelined by poverty across the county over the last 18 months.

And while Mary-Ellen and her sensational team’s ever changing supper menus are an absolute thing of beauty, the lunchtime offerings are just as joyous. And for the five (increasingly intoxicated) courses I enjoy on this luxurious lash of a Saturday, I get perilously close to doing quite a big cry at just how wondrous it all is. One course, in particular.

Unfortunately, one person who is not as enthusiastic about the incoming five courses is my dining partner, who shall remain unnamed, if not unshamed. A bottle of red and probably about a gallon of lager the previous night has rendered him almost nil by mouth. In fairness, a can of Pomona Factotum Pale is downed upon his arrival and he makes an attempt at one of the split pea chips that are presented in front of us to commence the meal, but he musters half a chip and looks like he might not last the afternoon without being placed on a drip. A wave of apologies are offered from him, but all I’m concerned about is how his inability to swallow any solids means I’m on double portions for the entire meal. Result tbh.

Back to those split pea chips, though, and the quotation mark swirl of mushroom ketchup that they are served with. Stacked Jenga-like on top of each other, I begin taking the tower apart and, once the first salty combo of the inner puree of the chips plus the ketchup meets tastebuds, I am tempted to order another five portions immediately. Washed down with the back end of an orange South African wine that was ordered pre-meal, my mate could have literally fallen off his chair in a dehydrated heap and I wouldn’t have blinked. This is snacking of the highest order. The delicate subtlety of the chips isn’t overpowered by the rich umami of the mushroom in the slightest. It blends together to tell you “order another bev and get a bit more comfortable”. Fortunately, I’m on the Creameries approved wine pairings for my meal and every single one hits the target with flawless accuracy.

While it is not strictly our next course, the soup that arrives next is what I’m going to jump to only because what precedes it is so devastatingly, eye wateringly glorious, I don’t want to do a disservice to any of the food that followed it. But more about that later.

The soup, though. That fucking squash soup with fennel pollen and parsley oil. What a mesmeric blend of Autumnal greatest hits it was. The colours alone deliver a seismic shake of excitement when the bowl is placed under my nose. Deep golden yellow Jackson Pollocked with bottle green speckles, it’s a psychedelic vision and a mouthful of pure Bonfire Night. The crisp air of the final three months of the year encapsulated in a bowl of soul pleasing nourishment.

Pleasantly warmed and two substantial glasses of wine down, the sight of slow cooked rabbit, served with sweetcorn puree, buttered greens and roasting juices making its way to our table was almost enough to make me openly weep. Keeping my emotions together (barely), I devoured both mine and my mate’s portions, struggling to restrain my enjoyment so as to not rub salt into the poor bloke’s wounds any further. The rabbit melts upon impact, barely needing the slightest of chews. It almost feels more Sunday lunch than Saturday session, but this is rectified with the Nebbiolo it is served with, which is very much a daytime disco of a wine.

The Creameries selection in question is a natural offering from Valfaccenda Vindabeive in Piemonte, Italy. The absolutely brilliant General Manager and Sommelier Emily Rose enthusiastically describes it as a wine containing ‘flabby grapes’ which, although may not sound all that appealing, make for an audaciously good drop which is, in appearance at least, not too dissimilar from Vimto and just as fun to drink.

Anyone who works their way through the Creameries wine list will very quickly come to the realisation that this is a restaurant that prides itself on sourcing from top drawer suppliers. Les Caves De Pyrene, Indigo Wines, Wine Under The Bonnet, Tutto and Newcomer all keep the Chorlton establishment impeccably well stocked year round and do an even better job at keeping lunchtime customers glowingly buzzed throughout a Saturday afternoon.

The final course is an immensely enjoyable flourless chocolate cake with fennel cream, white chocolate and hazelnut crumb. Paired with a Maury Mas Amiel vintage, it’s a decadent triumph of a finale. Or as I say over mouthfuls of cake crumbs, “sumptuous as fuck, that”.

Between the bewilderingly excellent food and drink and the ferociously good playlist soothing through the speakers overhead, there is an abundance of reasons to fall in love with The Creameries and one reason in particular, which I will get to shortly, that you should never, ever stop coming back for. But it would be remiss not to heap as much ever-loving praise upon their staff as is humanly possible. Menus, dishes and wines are explained and presented to us with genuine passion and interest. Knowing what hospitality staff have had to endure for the last 20 months, it’s almost cathartic to watch people immersed in their work as much as the people at The Creameries are. It would be so easy to overwhelm a customer, especially a wine novice such as myself, with detailed histories of what they are about to drink, but instead you find yourself wanting to know even more once your server has departed.

Which, finally, brings me onto the second of our courses and the one which I could dedicate an entire volume of articles to: The bread and butters.

If it wasn’t literally my job, I wouldn’t even attempt to use words to do it justice, I’d just tell you all to race to The Creameries immediately to experience it for yourselves.

Freshly baked, in house sourdough is accompanied by two semi circles of butter; one a whipped brown butter and the other a cultured butter with red Russian kale ferment liquor ripple (try saying that when you’re pissed). Deary me, where do I even start? It is so unspeakably good to the point I’m actually delighted that my mate is too hungover to contemplate eating anything. Every single mouthful, to lift a quote from Jonah Hill in Superbad, is like the first time I heard The Beatles. It’s the culinary equivalent of seeing When Harry Met Sally for the first time. It makes you beam from ear-to-ear like a complete fucking idiot. It’s pure fucking delirium inducing tackle and, had the meal ended right after my last morsel was completed, I would have been completely content.

The last couple of crumbs are washed down with an Andalusian El Muelle De Olaso and I wonder if it’s acceptable to just ask for three more courses of bread and wine, like some sort of pimped up culinary communion.

As we depart, more apologies are offered to a very understanding Mary-Ellen from my sheepish mate, as the chef stands over a counter of rabbits, looking like a scene from a Quentin Tarantino adaptation of Watership Down. The level of alcohol in my system and the sheer enjoyment I took in each and every dish and drink is almost enough for me to see if there’s any space available for the evening sitting, but I instead venture outside, back into the drizzling embrace of Wilbraham Road, very full and very, very happy.

I would urge everyone reading this to make the same decision for their lunch, multiple times over, over the coming Autumn months. Even if you’re not opting for the full lunch, the bar menu and snacks are more than enough to keep you coming back through the Creameries doors on a regular basis.