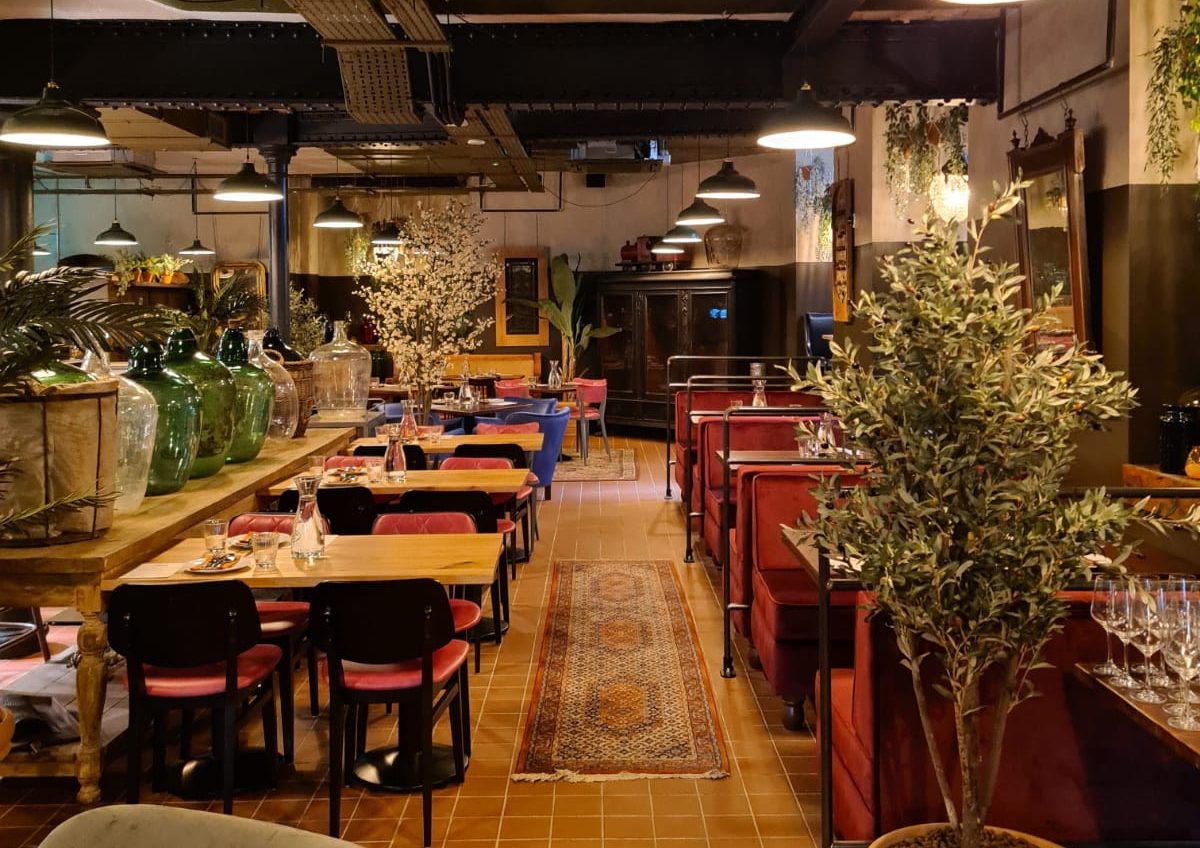 A new Middle Eastern-inspired restaurant from the team behind Manchester restaurants El Gato Negro on King Street and Canto in Ancoats has now opened its doors.

Simon said: “I was probably into Middle Eastern food before Spanish if I’m honest.  It was back in ‘98 when I was living in London that I first became interested in it. Going for a shawarma late at night was our thing.

“We’d go to these incredible places on Edgeware Road or in Bayswater after work, or even after we’d been out, it was quite a social thing.  I remember thinking wow, what a great style of food this is; it’s amazing, so fresh and vibrant.

“I knew then that I wanted to open a modern Middle Eastern restaurant; this isn’t a new thing.  I’ve directed some of that influence into dishes at El Gato Negro as there’s so much overlap in styles and ingredients, but it’s really exciting to focus on this diverse region’s many cuisines with Habas.”

The restaurant has been a long time coming, as the team has actually had the building on Brown Street for four years but, due to various reasons and most recently due to the pandemic, the restaurant has only just been able to open.

Walking down the stairs into the Grade II listed building, diners are greeted by a neon logo as they descend the steps towards the bar area. The space comprises a large dining area with an open kitchen; a bar serving signature and classic Middle Eastern cocktails, wines, beers and spirits; a lounge area where there will be live music performances; and a private dining area.

Some of the original features of the building has been restored, like exposed brickwork and original terracotta floor tiles. The space has a cosy feel, filled with wooden, leather and velvet furniture and dotted with Middle Eastern furnishings like Persian rugs and woven cushions. There are also some pieces that Simon has collected over the years like a neon bee sign, a retro fruit machine and a Manchester-themed mosaic.

Speaking about the space Simon said: “I always knew we’d acquired a great space.  It’s everything I like about buildings, it’s old, it’s quirky, it’s got lots of different facets to it.  When it was empty it was amazing but once we started to put the furniture in, and the bits I’ve been collecting these last four or five years, it ticked every box.  It’s reminiscent of some of the influences from Tel Aviv that I saw.  It’s everything I expected and more.”

The menu is split into six sections: mezze, seafood, meat, vegetables and grains, desserts, and sweets.

Signature dishes on the meat menu include spicy lamb ‘jackets’ which are fried potato skins filled with lamb and minted yoghurt (£8.50) and a crispy fried chicken schnitzel with chilli and lime butter (£11).

To finish there is a range of desserts like chocolate babka with coconut ice cream, Turkish delight cheesecake and Medjool date and orange cake, pistachio ice cream (all £6.50), alongside traditional sweets like baklava and homemade Turkish delight.

Touching on the menu Shaw added: “I’m very happy with the menu, it’s six months hard work, it feels well balanced and completely different to everything else that I’ve done.  There are a couple of old El Gato favourites in there, which as I’ve said before, were always waiting in the wings, but they sit really well with the style of this food.  I’m really happy with it.”

Diners can enjoy a lunch deal from 12 to 5pm Monday to Friday which is £15 per person and includes a selection of small plates, bread, hummus, zhug and sour cream, and can a drink can be added (Beirut beer, house wine or soft drink) for an extra £2.50.

Habas is located at 43a Brown Street and is open from Wednesday to Sunday with last food orders at 10pm.  To book a table visit: www.habas.co.uk. 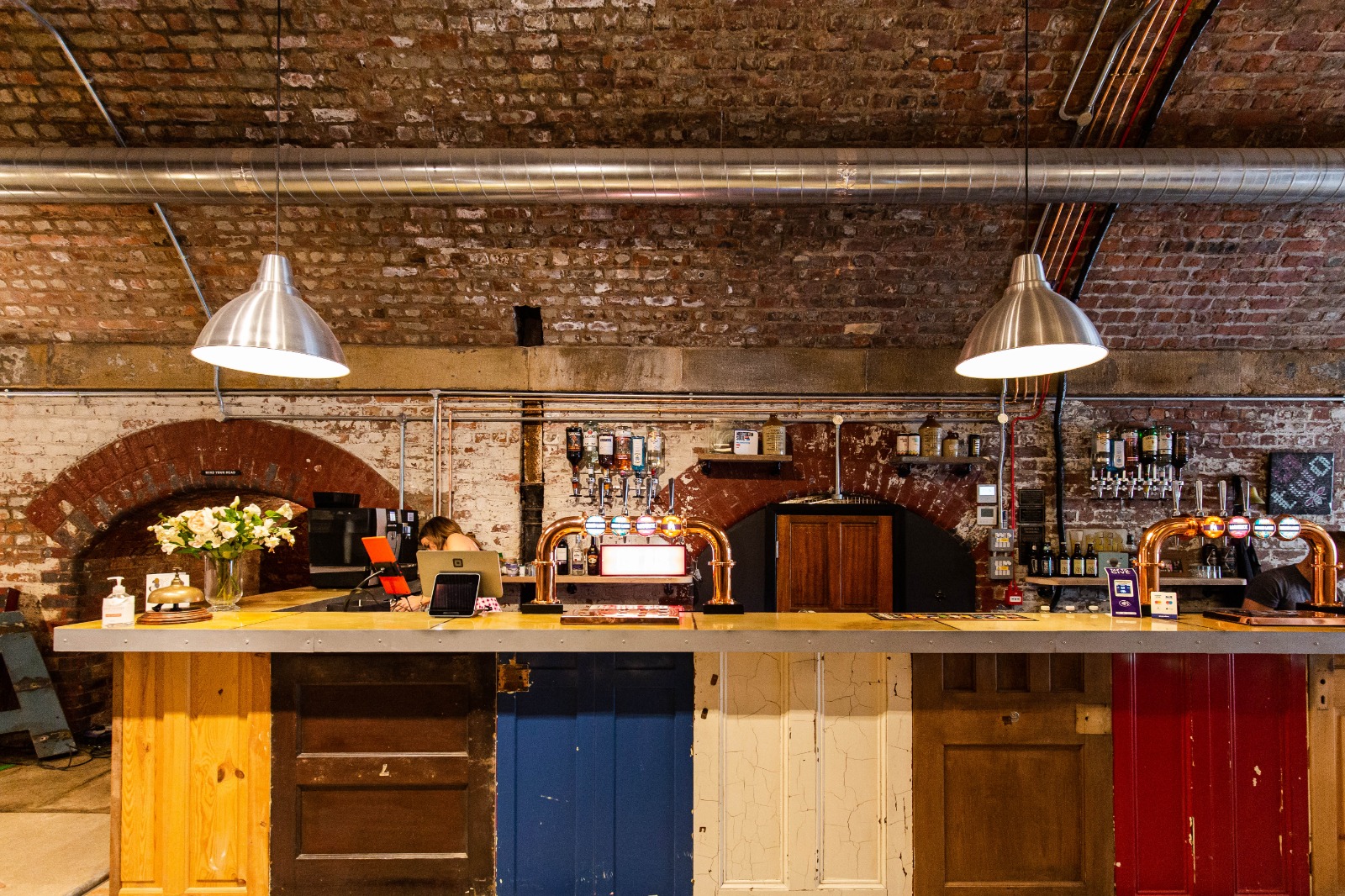 When a good boy eagerly greets you at the door, you can safely assume you’re onto a winner. A four legged friend bounding towards you, full pelt, dropping a knackered, rigorously chewed squeeze toy at your feet is an almost un-toppable welcome. And at the new, Grade II listed 53Two, it’s merely the first act in an enormously impressive ensemble offering.

The independent theatre group have set up shop under Watson Street’s historic railway arches, taking over a site that had sat derelict and fire damaged for 20 years. Having been previously located at the old Bauer Millett showrooms on Albion Street between 2016-2019, 53Two have maintained their penchant for under-arch drinking dens with their new establishment and, in turn, have delivered Manchester one of it’s most inviting new spaces.

Once you’ve sent Albi the theatre dog to go fetch, you’ll find yourself immersed in exposed red brick, stone flagging, upcycled furniture and, most importantly, Seabrooks as the pub crisp of choice. There’s an unmistakable swell of history and industry under 53Two’s arches, which has been fully embraced by artistic director Simon Naylor and venue manager Alexandra Maxwell.

Given it’s location and decor, there’s a genuine ‘World War Two bolthole getaway’ vibe to 53Two’s new digs. When I pay them a visit, the team are two days out from their grand opening and the Mancunian skies are a distinct Lowry grey outside. Inside, however, Simon is pulling me an IPA (supplied by local brewery Brightside) from the bar’s gleaming brass pumps and, once the inaugural swig is washed down, it’s difficult to picture wanting to be anywhere else for the next several hours. An overwhelming sense of comfort envelopes you from the world outside which, given how thoroughly miserable everything has been since March 2020, is a resounding positive.

Simon, who when not serving as the company’s artistic director, can also be seen appearing on stage and screen said, “We are so excited to be finally throwing the doors open to the 53Two Bar. We’re really proud of what we’ve created here and hope that it will be a hub for artists, drinkers, thinkers and absolutely anyone who supports independent theatre and hospitality. The bar is just the first step on our journey to creating an incredible new arts venue for the city – at a time when it is needed most. We’ve ensured that the bar embodies our values of inclusivity and will offer a warm welcome to everyone ahead of the theatre opening later in the year.“

The meticulous attention to detail that has gone into crafting the space from rubble to ritz is very much in keeping with the team’s background as a theatre company and arts hub. Framed black and white pictures hang on the walls near the entrance, chronicling the venue’s history, while every nook and snug has been transformed, one into a Chesterfield-laden New York style apartment scene, another a pair of chairs separated simply by a table and a lamp in a curation straight out of Wes Anderson’s playbook. When you reach the far end of the bar, you’ll find a vintage baby grand piano, primed for impromptu renditions of Bennie and The Jets, Song For Whoever or, of course, the theme tune from Frasier.

Those aforementioned nooks and snugs, by the way, should you find yourself situated in one, don’t expect to be leaving any time soon. Tucked away from the world and the weather, having pint after pint after gin and tonic delivered to your table? There’s seldom chance you’re removing yourself from such a setting after just one or two.

Perhaps most impressive, however, is 53Two’s dedication to inclusivity. A lowered bar and till area has been installed for ease of access to disabled customers, while all staff have received sign language training from BSL (British Sign Language), with the team behind the bar learning how to sign the bar menu as well as key service phrases. The venue has also been fitted with visual fire alarms for additional safety and tactile card reader pads for partially sighted customers. Furthermore, all tables have been purposefully designed so wheelchairs can fit comfortably at them and, in the event more access is needed, the modular tables can even be removed from the walls altogether.

Given that 53Two’s new location on south Deansgate was once the gateway to the North for cotton industry traders, it seems fitting that the space is now available for Mancunians to ply their various different trades, whether it’s over a few coffees and a laptop during the day or, eventually, in the evening when Phase Two opens, under the adjoining archway, which will eventually house a fully accessible 150 seater theatre and event space.

Food meanwhile, will be provided courtesy of Bolton’s HM Pasties, a bakery offering training and employment for ex-offenders. And let’s face it, there isn’t a much more wonderful experience that can be had than tucking away a jerk chicken pie, washed down with a cold pint after a day of slowly going insane in front of a laptop screen, is there?

Oh, and that back door, off to the right of the toilets? Out of bounds until 11pm, after which it becomes a special ‘members entrance’ for those in the cultural sector and friends of the bar. Here’s hoping Simon and Alex also throw a regularly changing password and secret handshake in there for ultimate Speakeasy vibes.

In an age where Manchester finds itself in a perpetual state of regeneration, it’s refreshing to find a place that looks back just as much as it looks forward and, in the new 53Two, the city’s gained itself a bar that would fit ideally in any era.